June 17, 1818 - Birth of Sophia of Württemberg, first wife of William III of the Netherlands

June 18, 1269 - Birth of Eleanor of England, daughter of Edward I, at Windsor Castle

June 18, 1975  Beheading of Prince Faisal bin Musad of Saudi Arabia for the assassination of his uncle King Faisal

June 19, 1500 - Death of Edmund, Duke of Somerset, son of Henry VII and Elizabeth of York; buried at Westminster Abbey

June 19, 1566 - Birth of James VI of Scotland (later James I of England), son of Mary, Queen of Scots, at Edinburgh Castle

June 19, 1850 - Wedding of Carl XV of Sweden (Carl IV of Norway) and Louise of the Netherlands

June 19, 1976 - Wedding of Carl XVI Gustaf of Sweden and Silvia Sommerlath
And their daughter is getting married on their 34th anniversary (see below) June 20, 1818  Death of Hedwig Elizabeth Charlotte of Holstein-Gottorp, wife of Charles XIII of Sweden; buried at Riddarholm Church in Stockholm

June 21, 1221  Wedding of Joan, daughter of King John, to King Alexander of Scotland, at York Minster

June 21, 1646 - Birth of Marie Françoise of Nemours, wife of Afonso VI of Portugal and his brother King Pedro II of Portugal

June 21, 1806  Wedding of Christian VIII of Denmark (first marriage) and Charlotte of Mecklenburg-Schwerin

June 21, 1818  Birth of Ernst II, Duke of Saxe-Coburg and Gotha
Ernest was the brother of Prince Albert, Queen Victorias husband.

June 22, 1000  Birth of Robert I the Magnificent, Duke of Normandy
Robert was the father of William the Conqueror.

Paris at the Barricades! 22 June, 1848 marked the beginning of the June Days Uprising, part of the wider French Revolution of 1848. 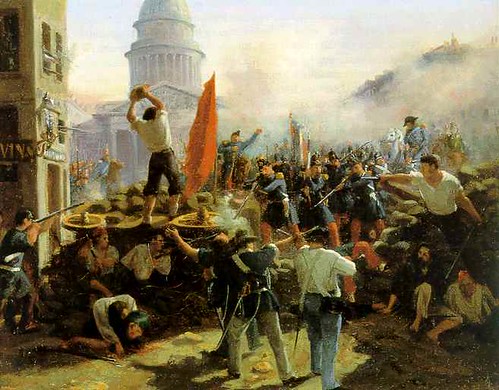 June 23, 1703  Birth of Maria Leszczyńska of Poland, wife of Louis XV of France

June 24, 1311  Birth of Philippa of Hainault, wife of Edward III, at Valenciennes, Flanders

June 24, 1314 - Robert I of Scotland defeats the English in the Battle of Bannockburn

June 24, 1348 - Birth of William of Windsor, son of Edward III, at Windsor Castle
William was the sixth son and eleventh child of Edward III and Philippa of Hainault. He lived only until September of 1348 and was buried at Westminster Abbey.

June 24, 1509 - Coronation of Henry VIII
Henry VIIIs first wife Catherine of Aragon was crowned with him. His second wife Anne Boleyn was crowned on June 1, 1533. Henrys four other wives were never crowned.

June 24, 1768  Death of Maria Leszczynska of Poland, wife of Louis XV of France

June 25, 1667  Wedding of Christian V of Denmark and Charlotte Amelia of Hesse-Cassel

June 25, 1755  Birth of Wilhelmina Louisa of Hesse-Darmstadt, first wife of the future Tsar Paul I of Russia

June 25, 1864  Death of William I of Württemberg at Schloss Rosenstein, Stuttgart, Germany; buried at the Württemberg Mausoleum, Stuttgart