[quote=""annis""]
This piece appears in Kate Norgate's book "John Lackland" see pg 285 - whether she took it from elsewhere I'm not sure, though she does provide references. [/quote]
I have a feeling it's from a chronicle and the same chronicle, or a different one, goes on to say that some of servants were alarmed by the wailing of the wind which they took for the wailing of John's soul, and the Abbot of Croxton had to tell them to get a grip. But irritatingly, I can't remember where I read this. It'll bother me now until I track it down.

[quote=""annis""]EC did an interesting article on her Living the History blog about Newark, the town where John died and mentions the storm at the time of his death. Such a dramatic exit seems very appropriate! [/quote]

Yes indeed...almost too good to be true from the storytelling pov, which makes me wonder if the storm itself isn't legend. I suppose there's no way of checking as weather records wouldn't have begun yet. Hope it's true as I like the story.

[quote=""annis""]It seems that John was deserted by his servants after his death- they all abscounded with any moveable goods they could grab, even leaving his body without a cover. This sounds almost an exact repeat of what happened at the death of John's father, King Henry II. I guess royal servants never knew whether they'd get paid or not after their master died.[/quote]

Yes, and with civil war raging it would more doubtful than ever. By the 17th century, in France at least, royal servants were entitled to various possessions after their masters' deaths, as a perquisite of office. At least one chest of drawers now in the Royal Collection left the king's bedroom at Versailles that way and had to be replaced at great expense by the new king, Louis XVI. I wonder if this custom developed from the more informal proceedings in the medieval period?

Apart from that, Annis, what you said rang a bell and I've just remembered where - this scene in A Christmas Carol.
Top

Yes indeed - snap, even to the shirt on the body! Good luck with the chronicle hunt - it's so infuriating when you know you seen something somewhere and it just won't come to mind

Norgate does mention both Ralph of Coggeshall and Roger of Wendover in her footnote relating to this incident, so that might be a starting point, perhaps?
Last edited by annis on Sun October 18th, 2009, 7:17 am, edited 2 times in total.
Top

October 19, 1889  Death of Luís I of Portugal at Cascais, Portugal; buried at the Monastery of São Vicente de Fora, Lisbon

19 October, 202 BC  Hannibal Barca, leader of the invading Carthaginian army, is defeated by the Roman legions under Scipio Africanus in theBattle of Zama. 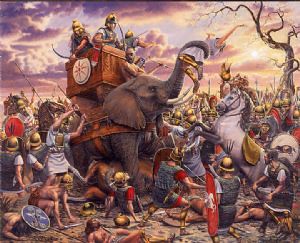 October 20, 1714 - Coronation of George I
No queen was crowned. George had divorced his wife Sophia Dorothea of Celle in 1694 and held her in the Castle of Ahlden in Celle until her death 32 years later.

October 20, 1714 - Coronation of George I
No queen was crowned. George had divorced his wife Sophia Dorothea of Celle in 1694 and held her in the Castle of Ahlden in Celle until her death 32 years later.

oh my goodness! I didn't know about this specific detail of George's I divorced wife--Sophia Dorothea of Celle. Such cruelty blows my mind away!

Im glad that some things have changed over the centuries (specially in regards to a 'divorced wife')
"A scar signifies past pain, a wound that did not heal as it ought. But it testifies, too, to survival" (Here Be Dragons)

October 21, 1449 - Birth of George, Duke of Clarence, son of Richard, Duke of York and brother of Edward IV and Richard III, at Dublin Castle, Dublin, Ireland

October 21, 1449 - Birth of George, Duke of Clarence, son of Richard, Duke of York and brother of Edward IV and Richard III, at Dublin Castle, Dublin, Ireland

October 21, 1821 - Birth of Thomas Lyon-Bowes, the Monster of Glamis
The Monster of Glamis was reportedly a deformed member of the Bowes-Lyon family (the late Queen Mother's family) kept in seclusion at Glamis Castle, Scotland.
~Susan~
~Unofficial Royalty~
Royal news updated daily, information and discussion about royalty past and present
http://www.unofficialroyalty.com/
Top

October 22, 1071 - Birth of William IX, Duke of Aquitaine
William, the grandfather of Eleanor of Aquitaine, was one of the first European lyric poets and used vernacular language in his songs and poems. He is considered to be the first troubadour.

October 22, 1660 - Birth of Charles, Duke of Cambridge, son of James II, at Worcester House, London, England
Charles was the eldest son of James, Duke of York (later James II) and his first wife Anne Hyde. He died at age 6 months and was buried in Westminster Abbey.

"England expects that every man will do his duty"

21 October, 1805, the naval Battle of Trafalgar, the British navy led by Lord Admiral Nelson versus the forces of France and Spain,. The British win decisively, but at the height of victory Nelson is killed. 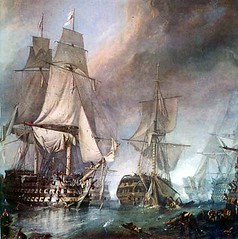 A signal flag used during the famous battle sold recently for an unexpectedly large amount at auction today;
http://www.independent.co.uk/news/uk/th ... 06602.html

(Sorry, I was a bit late getting this on, but posted it before noticing that it's actually the 22nd. Due to someone forgetting to change the calendar at work today, I've spent the whole day convinced that it was the 21st!)
Last edited by annis on Thu October 22nd, 2009, 3:44 am, edited 6 times in total.
Top