On Oct. 6, 1981, Egyptian President Anwar Sadat was shot to death by Islamic militants while reviewing a military parade.

Along with the assassination of Izkack Rabin, a major tragedy for mideast peace.
Top

October 7, 1870  Birth of Prince Friedrich of Hesse and by Rhine at Neues Palais, Darmstadt, Germany
A grandson of Queen Victoria, Friedrich, known as Frittie in the family, was the son of Princess Alice and Grand Duke Louis of Hesse and by Rhine. Afflicted with hemophilia, he died after falling from a window at age 3. His sister was Empress Alexandra Feodorovna, wife of Tsar Nicholas II of Russia.

October 9, 1934 - Assassination of Alexander I of Yugoslavia at Marseilles, France; buried at the Memorial Church of St. George, Oplenac nearby Topola, Serbia

October 10, 1914 - Death of Carol I of Romania at Sinaia, Romania; buried at the Curtea de Arges Monastery

The Burchardi Flood, (also known as the second Grote Mandrenke) was a Storm Tide that struck the North Sea coast of Nordfriesland (Germany and Denmark) on the night between the 11 and 12 October 1634. Overrunning dikes it shattered the coastline and many thousands of lives (8,000 to 15,000 people drowned) while causing catastrophic material damage. Much of the island of Strand washed away, forming the islands Nordstrand, Pellworm and several Halligen. 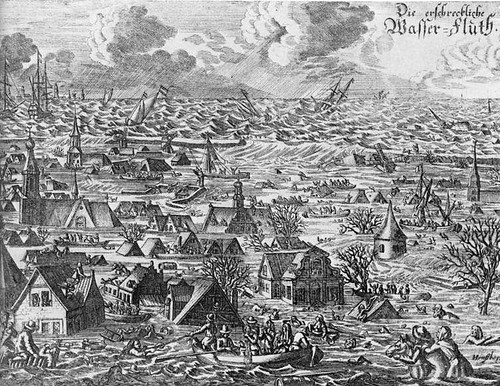 I find this event interesting in light of the Samoan tsunami, which has had a great impact in this part of the world. A lot of New Zealanders have Samoan connections, and we have ourselves been on tsunami alert twice this past couple of weeks.
Last edited by annis on Sat October 10th, 2009, 10:19 pm, edited 1 time in total.
Top

October 12, 1459  Lancastrian score a victory at the Battle of Ludford Bridge

October 12, 1810 - Wedding of Crown Prince Ludwig of Bavaria and Princess Therese of Saxe-Hildburghausen
The public was invited to attend the event which became an annual celebration later known as Oktoberfest.

October 12, 1837 Death of Wilhelmine of Prussia, wife of William I of the Netherlands, at Noordeinde Palace in The Hague; buried at Nieuwe Kerk in Delft

October 13, 1162 - Birth of Eleanor, daughter of Henry II, at Domfront Castle, Normandy
Eleanor was the second daughter of Henry II and Eleanor of Aquitaine. In 1179, she married King Alfonso VIII of Castile. The marriage was a happy one and produced four sons and eight daughters.

October 13, 1453 - Birth of Edward, Prince of Wales, son of Henry VI, at the Palace of Westminster

October 13, 1825  Death of Maximilian I of Bavaria at Nymphenburg Palace, near Munich; buried at Theatinerkirche (St. Kajetan) in Munich

October 14, 1066 - Death of Harold II at the Battle of Hastings; buried at Waltham Abbey, Essex

October 14, 1274 - Death of Henry, son of Edward I, at Merton, Surrey; buried at Westminster Abbey

October 14, 1574  Birth of Anne of Denmark, daughter of Frederik II of Denmark, wife of James VI of Scotland/James I of England, at Skanderborg Castle, Jutland, Denmark

October 14, 1586 - Mary, Queen of Scots goes on trial for conspiracy against Elizabeth I

October 14, 1630 - Birth of Electress Sophia of Hanover at Wassenaer Court, The Hague, Holland
In 1701, the British succession was settled upon Sophia and her Protestant heirs by the Act of Settlement. Her mother Elizabeth was the eldest daughter of King James I. Sophia died six weeks before Queen Anne. Had she survived Anne, Sophia would have been queen. Instead her son ascended the throne as King George I.

October 14, 1631  Death of Sophie of Mecklenburg-Güstrow, wife of Frederick II of Denmark, at the Palace of Nykøbing Slot on the island of Falster, Denmark; buried at Roskilde Cathedral

1307  Hundreds of Knights Templar in France are simultaneously arrested by agents of Philip the Fair, to be later tortured into "admitting" heresy.
http://en.wikipedia.org/wiki/1332
1362 On 13 October 1362 the Chancellor of England for the first time opened Parliament with a speech in English.

1582  Because of the implementation of the Gregorian calendar, this day does not exist in this year in Italy, Poland, Portugal and Spain.