July 28, 1683 - Wedding of (the future) Queen Anne of England and George of Denmark, son of Frederick III of Denmark, at the Chapel Royal, St. James Palace

On the news here today (Wednesday) they are talking about it being the 50th anniversary of the first commercial passenger flight over the Pacific. The vision was interesting looking at the food, and the fact that there were lots of smokers etc.
My Blog - Reading Adventures

July 29, 1030 - Death of Olav II of Norway in battle at Stiklestad, Norway; thought to be buried under Nidaros Cathedral, Trondheim

July 29, 1565 - Wedding of Mary, Queen of Scots and Henry, Lord Darnley, at Holyrood Palace, Edinburgh, Scotland
Mary and Darnley were both grandchildren of Margaret Tudor, daughter of Henry VII.

July 29, 1588 - Defeat of the Spanish Armada in the Battle of Gravelines by the English navy

July 29, 1900 - Assassination of Umberto I of Italy by anarchist Gaetano Bresci at Monza, Italy; buried in the Pantheon, Rome

July 26, 1867  Death of former King Otto of Greece, born Prince Otto of Bavaria, at palace of the former bishops in Bamberg, Germany; buried at Theatinerkirche St. Kajetan in Munich

July 26, 1944 - Death of Reza Shah Pahlevi, former Shah of Iran and father of the last Shah, in exile in Johannesburg, South Africa; buried at Reza Shah's mausoleum in Ray, Tehran, Iran which was later destroyed during the 1979 Iranian Revolution

July 26, 1958 - Debutantes presented at the British royal court for the last time[/quote]

29 July 1890: Vincent van Gogh dies in an attic room of the Auberge Ravoux at Auvers-sur-Oise (a village not far from Paris), the victim of a self-inflicted gunshot wound almost two days earlier. His brother, Theo van Gogh, was at his bedside.

Rest in peace, cher Vincent.
Sunflowers: A Novel of Vincent van Gogh, forthcoming from Avon-A, 13 October 2009
My blog: http://vangoghschair.blogspot.com
My website: http://www.sheramybundrick.com
For it is truly the discovery of a new hemisphere in a person's life when he falls seriously in love. -Vincent van Gogh
Top

July 30, 1126  Death of Abbess Cecilia, daughter of William I, at the Abbey of the Holy Trinity in Caen, Normandy; buried at the Abbey of Holy Trinity, Caen
Born about 1055, Cecilia was a daughter of William the Conqueror and Matilda of Flanders. She entered the Benedictine Convent of the Holy Trinity at Caen in Normandy in 1074. On the death of Abbess Matilda in 1112, Cecilia was elected Abbess and held that office until her death. She was buried in the nuns' choir at the convent.

July 30, 1700  Death of William, Duke of Gloucester, son of Queen Anne, at Windsor Castle, buried at Westminster Abbey
The 11 year old dukes death (from smallpox) was the major reason for the passage of the Act of Settlement in 1701 which gave the throne to Sophie, Electress of Hanover and her Protestant descendants.

July 30, 1912 - Death of Emperor Meiji of Japan; buried in the Fushimi Momoyama Ryo (Graveyard) in Kyoto, his soul enshrined in Meiji Shrine in Tokyo

July 31, 1750  Death of João V of Portugal in Lisbon; buried at the Monastery of São Vicente de Fora, Lisbon

July 31, 1790  Wedding of Frederik VI of Denmark and Marie of Hesse-Cassel

July 31, 1812  Birth of Amélie of Leuchtenberg, second wife of Emperor Pedro I of Brazil (King Pedro IV of Portugal)

July 31, 1942  Death of Maria Ana of Portugal, wife of Grand Duke Guillaume IV of Luxembourg, in exile during World War II in New York City; buried at the Notre-Dame Cathedral in Luxembourg

1 August, 1798, The Battle of the Nile, also known as the Battle of Aboukir Bay, - Rear-Admiral Horatio Nelson wins one of the decisive naval victories of the French Revolutionary Wars for England. 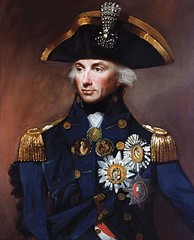 August 1, 1402 - Death of Edmund of Langley, Duke of York, son of Edward III, at Kings Langley, Hertfordshire, buried at the Church of the Medicant Friars, Kings Langley

August 1, 1714 - Death of Queen Anne at Kensington Palace, buried at Westminster Abbey; George, Elector of Hanover succeeds her as George I