July 18, 1501  Birth of Isabella of Austria, wife of Christian II of Denmark, Sweden, and Norway

July 18, 1938  Death of Marie of Edinburgh, wife of King Ferdinand I of Romania, granddaughter of Queen Victoria, at Peles Castle, Sinaia, Romania, buried at the Monastery of Curtea de Arges, Romania
Marie was the daughter of Prince Alfred, Duke of Edinburgh and Grand Duchess Marie Alexandrovna of Russia.

July 19, 1415  Death of Philippa of Lancaster, daughter of John of Gaunt, wife of John I of Portugal

July 19, 1810  Death of Luise of Mecklenburg-Strelitz, wife of Frederick William III of Prussia, at Schloss Hohenzieritz in Mecklenburg-Vorpommern, Germany; buried in the garden at Charlottenburg Palace, Berlin

July 19, 1821 - Coronation of George IV
Georges estranged wife Caroline of Brunswick was not crowned with him. She came to Westminster Abbey, but was not admitted. She died a few weeks later.

July 19, 1822  Birth of Princess Augusta of Cambridge, wife of Friedrich Wilhelm, Grand Duke of Mecklenburg-Strelitz
Augusta was a granddaughter of George III, first cousin of Queen Victoria, and aunt of Queen Mary.

July 20, 1346  Birth of Margaret of Windsor, daughter of Edward III, at Windsor Castle

July 20, 1524 - Death of Claude of France, first wife of Francis I of France, eldest daughter of Louis XII of France, at the Chateau de Blois, Blois, France; buried at St. Denis Basilica

July 20, 1572  Wedding of Frederik II of Denmark and Sophia of Mecklenburg-Guströw

July 20, 1951 - Assassination of Abdullah I of Jordan at Al Aqsa Mosque in Jerusalem; buried at Royal Cemetery, Amman, Jordan

July 21, 1831  Leopold of Saxe-Coburg-Gotha, uncle of Queen Victoria and Prince Albert, ascends to the throne of Belgium

July 22, 1210 - Birth of Joan of England, daughter of King John, at Gloucester, England

July 22, 1298 - Edward I combines bowmen and cavalry to defeat William Wallace's Scots at the Battle of Falkirk

July 22, 1478 - Birth of Philip the Handsome, Duke of Burgundy, husband of Queen Juana of Castile

July 22, 1816 - Wedding of Princess Mary, daughter of George III, and Prince William, Duke of Gloucester, her first cousin, at the Private Chapel, Buckingham Palace
At age 40, Mary married her first cousin William, son of her fathers brother. Mary was the last of George IIIs children to die (in 1857) and was a favorite aunt of Queen Victoria.

July 22, 1832  Death of Napoléon II, Emperor of the French, at Schönbrunn Palace in Vienna; originally buried in the Kapuzinergruft in Vienna; his remains were transferred to Les Invalides in Paris, but his heart remains at the Herzgruft in the Augustinerkirche in Vienna, and his viscera remains at the Ducal Crypt in Stephansdom in Vienna

July 23, 1952 - King Farouk of Egypt deposed by military coup led by Gamal Abdel Nasser
Farouk is famous for saying, "In a few years there will be only five kings in the world -- the King of England and the four kings in a pack of cards."

July 23, 1993 - Wedding of Hereditary Prince Alois of Liechtenstein and Duchess Sophie of Bavaria

July 24, 1689  Birth of William, Duke of Gloucester, son of Queen Anne, at Hampton Court Palace, Richmond, England
William was the only one of Queen Annes numerous children to survive a significant amount of time. A sickly child, who suffered from hydrocephalus, he died at age 11 of smallpox.

July 25, 306 - Constantine I proclaimed Roman Emperor by his troops

July 25, 1554 - Wedding of Mary I and Philip II of Spain at Winchester Cathedral

July 25, 1603 - Coronation of James I
James wife Anne of Denmark was crowned with him.

July 26, 1469  Lancastrian victory at the Battle of Edgecote Moor

July 26, 1867  Death of former King Otto of Greece, born Prince Otto of Bavaria, at palace of the former bishops in Bamberg, Germany; buried at Theatinerkirche St. Kajetan in Munich

July 26, 1944 - Death of Reza Shah Pahlavi, former Shah of Iran and father of the last Shah, in exile in Johannesburg, South Africa; buried at Reza Shah's mausoleum in Ray, Tehran, Iran which was later destroyed during the 1979 Iranian Revolution 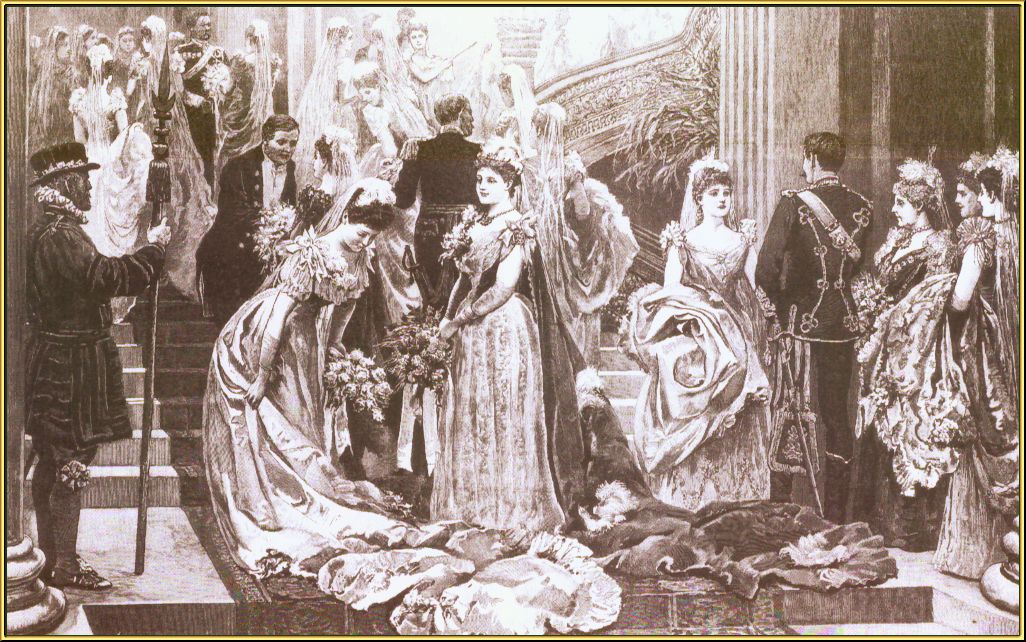