May 21 in royal history:

May 21, 1481  Death of Christian I of Denmark in Copenhagen; buried at Roskilde Cathedral

May 21, 1662 - Wedding of Charles II and Catherine of Braganza at St Thomas à Becket Church, Portsmouth

May 21, 1806  Death of Maria Antonia of Naples and Sicily, first wife of Ferdinand VII of Spain; buried at the Monastery of San Lorenzo El Real in El Escorial

May 21, 1864  Birth of Stéphanie of Belgium, wife of Crown Prince Rudolf of Austria

May 21, 1889  Birth of Prince Leopold of Battenberg, grandson of Queen Victoria, at Windsor Castle
Leopold was the son of Princess Beatrice and Prince Henry of Battenberg. His mother was a hemophilia carrier and he inherited the disease from her. Leopold never married and died following emergency surgery.
~Susan~
~Unofficial Royalty~
Royal news updated daily, information and discussion about royalty past and present
http://www.unofficialroyalty.com/
Top

May 22 in royal history:

May 22, 1127 - Wedding of Empress Maud, daughter of Henry I, and Count Geoffrey V of Anjou, at Le Mans Cathedral

May 22, 1455 - Henry VI is taken prisoner by the Yorkists at the First Battle of St. Albans

May 22, 1770 - Birth of Princess Elizabeth, daughter of George III, at Buckingham Palace

May 22, 1782  Death of Friederike of Hesse-Darmstadt, wife of Charles II, Grand Duke of Mecklenburg-Strelitz

May 22, 1815  Wedding of Christian VIII of Denmark (second marriage) and Caroline Amelia of Schleswig-Holstein

May 22, 1823  Wedding of Oscar I of Sweden and Joséphine of Leuchtenberg

May 23 in royal history:

May 23, 1857  Birth of Marie of Waldeck-Pyrmont, wife of William II of Württemberg

May 23, 2010 - Death of Princess Leonida Bagration-Moukhransky, wife of Grand Duke Vladimir Cyrillovich, pretender to the Russian throne, at Madrid, Spain; buried at the Grand Ducal Burial Vault at the Peter and Paul Fortress in St. Petersburg
~Susan~
~Unofficial Royalty~
Royal news updated daily, information and discussion about royalty past and present
http://www.unofficialroyalty.com/
Top

May 24 in royal history:

May 24, 1153  Death of David I of Scotland at Carlisle, Cumbria; buried at Dunfermline Abbey, Fife, Scotland 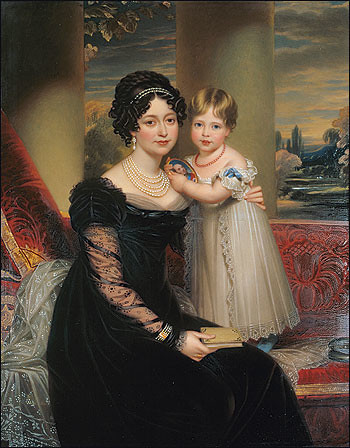 May 24, 1995 - Birth of Prince Joseph Wenzel of Liechtenstein

May 24, 2002 - Wedding of Princess Märtha Louise of Norway and Ari Behn

May 25 in royal history:

May 25, 1690  Birth of Prince Johann Josef Adam of Liechtenstein

May 25, 1786  Death of Pedro III of Portugal, husband and uncle of Maria I, co-reigned alongside her until his death; buried at the Monastery of São Vicente de Fora, Lisbon

May 25, 1846 - Birth of Princess Helena, daughter of Queen Victoria, at Buckingham Palace

May 25, 1946 - Abdullah ibn Hussein becomes king of Jordan
King Abdullah was the grandfather of the late King Hussein.

May 25, 1966  Birth of Petra Laurentien Brinkhorst, wife of Prince Constantijn of the Netherlands
~Susan~
~Unofficial Royalty~
Royal news updated daily, information and discussion about royalty past and present
http://www.unofficialroyalty.com/
Top

May 26 in royal history:

May 26, 946 - Death of Edmund I (the Magnificent) at Pucklechurch, Dorset; buried at Glastonbury Abbey, Somerset

May 26, 1826  Birth of Grand Duchess Elizabeth Mikhailovna of Russia, first wife of Grand Duke Adolphe I of Luxembourg
Elizabeth died at age 18 in childbirth along with her baby daughter. Her husband had an Orthodox church built for her remains. The church was built on a hill which was visible from Adolphe's residence so he could always see where Elizabeth's remains were buried.

May 26, 1842 - Wedding of Christian IX of Denmark and Louise of Hesse-Cassel

May 26, 1867 - Birth of Princess Victoria Mary of Teck, wife of George V, at Kensington Palace

May 26, 1990 - Birth of Zenouska May Mowatt, daughter of Marina Ogilvy
Zenouska is the granddaughter of the Queen's cousin, Princess Alexandra.
~Susan~
~Unofficial Royalty~
Royal news updated daily, information and discussion about royalty past and present
http://www.unofficialroyalty.com/
Top

May 27 in royal history:

May 27, 1541- Execution of Margaret Pole, 8th Countess of Salisbury, daughter of George, Duke of Clarence, at the Tower of London; buried at St. Peter ad Vincula, Tower of London
Margaret was beatified by the Roman Catholic Church in 1886 and is known as Blessed Margaret Pole.

May 27, 1770 – Death of Sophia Magdalene of Brandenburg-Kulmbach, wife of Christian VI of Denmark and Norway, at Christiansborg Palace; buried in Roskilde Cathedral

May 27, 1987- Wedding of Prince Jean of Luxembourg and Helene Vestur
The couple has since divorced.

May 27, 2004 - Wedding Prince Hamzah of Jordan, son of King Hussein, and Princess Noor of Jordan
The couple divorced in September 2009.
Last edited by Susan on Fri May 27th, 2011, 10:37 pm, edited 1 time in total.
~Susan~
~Unofficial Royalty~
Royal news updated daily, information and discussion about royalty past and present
http://www.unofficialroyalty.com/
Top

May 28 in royal history:

May 28, 1368 - Wedding of Lionel of Antwerp, Duke of Clarence and Violante Visconti at Church of St Maria Maggiore, Milan, Italy

May 28, 1656  Birth of Prince Anton Florian of Liechtenstein

May 28, 1660 - Birth of George I at Leineschloss, Osnabruck, Hanover, Germany

May 28, 1957 - Birth of Sylvana Palma Tomaselli, wife of George Windsor, Earl of St. Andrews
The Earl of St. Andrews is the eldest son of the Queen's first cousin the Duke of Kent. He has lost his place in the succession to the throne because he married a Catholic. Sylvana Tomaselli is Director of Studies in History Part I and Social & Political Sciences at St John's College, Cambridge University.

May 29 in royal history:

May 29, 1814 - Death of Josephine de Beauharnais, Napoleon's first wife, at the Château de Malmaison, near Paris; buried at St. Pierre and St. Paul church in Rueil
Napoleon and Josephine had divorced in 1809 after 13 years of marriage.

May 29, 1873  Death of Prince Friedrich of Hesse and by Rhine, grandson of Queen Victoria, at Neues Palais, Darmstadt, Germany; buried at the Mausoleum of Rosenhöhe, Hessen-Darmstadt
Prince Friedrich, known as Frittie in the family, was the son of Princess Alice and Grand Duke Louis of Hesse and by Rhine. Afflicted with hemophilia, he died after falling from a window at age 3.

May 30 in royal history:

May 30, 1536 - Wedding of Henry VIII and Jane Seymour at York Place (Whitehall), London
Some sources say the marriage was on May 20.

May 30, 1574  Death of Charles IX of France at the Château de Vincennes; buried at Saint Denis Basilica