Heart of the West by Penelope Williamson

Heart of the West by Penelope Williamson 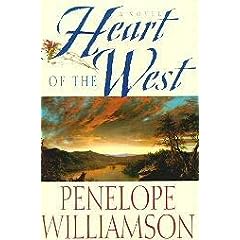 Sixteen year old Clementine Kennicutt, Boston born and raised in an authoritarian and pious household yearns for something more, and thinks she's found it when Montana Cowboy Gus McQueen runs her down on his bicycle. They marry and they're off to Gus's Montana ranch, although Clem, who is used to servants performing menial tasks, is in for a shock as things are more rustic than she had anticipated, let alone learning to deal with the mud, rains, wind, wolves, Indians and severe winters. Gus turns out to be a bit more rigid than she expected and despite their feelings for each other, Clem always yearns for something more -- which she soon finds in Gus's devil may care younger brother Zach. At first Zach hates Clementine and her Boston blue-blood ways and doesn't think she'll last until winter without running for home, but Clem has a stubborn streak and eventually Zach's resentment turns to attraction and sparks start to fly between the two.

Well, that all sounds promising enough and I has all hyped to get myself into this book but I was a bit disappointed in how the story was executed. The author spent too much time on storylines for the secondary characters, and those characters were all cardboard cut-out stereo typical of every TV western I've ever seen. The saloon owner/former prostitute with the heart of gold, the grizzled hard drinking prospectors, the evil mine owning sneaky father-in-law and worst of all was Lily the mail order bride from China. Now don't misunderstand me, but I swear I kept expecting Hop Sing to drop by for a visit from the Ponderosa - Lily and Sam were just way over the top, especially with her "golden lilies". As much as I love a big fat epic story this one could have used some serious paring down by losing a few secondary people and sticking to the main focus of Zach and Clem - although there again I felt the author could have been more creative in how she built the tension up between the two - the references to lightening flashes sparking in the air between them got a bit old, as did everyone noticed the denied passion between the two except for Gus. OK.....

Be warned, the book covers a twelve year span in Clem's life and the author takes way too long for the big payola after all that angst - run out of steam perhaps and finish it off too quickly? It's just too serious for a romance and not serious enough for readers of historicals. I think it might have worked better if the author had kept her feet firmly planted in her cheek, especially with the lesser characters, every once and a while she'd cut lose and I'd think now we're taking off and then she dropped me again. All in all an average read, not great but not bad either. The author does have another book set in Montana called The Outsiderthat I've got out from the library so I'll give her one more whirl before calling it quits. 3/5 stars.
Last edited by Misfit on Wed December 3rd, 2008, 9:15 pm, edited 1 time in total.
Top

The "Outsider" is the story of a gunslinger who is cared for by a young woman of the Plain religion after he's wounded in a shoot-out. This one is interesting, if a bit improbable, because of all the secondary characters. When the hero falls for the widow he has to take on not just her young son, but also all the other members of the Plain community. There's conflict too between the sheep-farming Plain people and the the big local cattlerancher. I quite enjoyed it, though my favourite Williamson is "Keeper of the Dream'", a wonderfully romantic medieval tale with a touch of fantasy.
Top

Thanks Annis, I have read Keeper of the Dreams and enjoyed that - especially the young squire with the bit of magic about him. I had so much fun with Cathy Cash Spellman's Paint the Wind I was hoping for more of the same here, perhaps I'll have better luck in the Outsider.
Top

Misfit, have you read any of Lucia St.Clair Robson's novels about the American west? She knows her research, and the two that I've read so far are very very good. Without stereotypes, save for the ones that really did happen. Her one on Cynthia Ann Parker is one of the best -- and I tend to have a low tolerance level for westerns.
Top