I just heard about this series beginning 17 October on the CW.

This is the premise:


Hidden between the lines of the history books is the story of Mary Stuart, the young woman the world would come to know as Mary, Queen of Scots. The teenage Mary is already a headstrong monarch ─ beautiful, passionate and poised at the very beginning of her tumultuous rise to power.

Arriving in France with four close friends as her ladies-in-waiting, Mary has been sent to secure Scotlands strategic alliance by formalizing her arranged engagement to the French kings dashing son, Prince Francis. But the match isnt signed and sealed, it depends more on politics, religion and secret agendas than affairs of the heart. Prince Francis is intrigued by the fiery Scot, but like most young men, he resists the idea of settling down into marriage, especially when he has a history with a lady of the court and his own point of view on the wisdom of an alliance with Scotland. Still, an attraction between Mary and Francis is ignited.

Further complicating things is Bash, Francis handsome, roguish half-brother, who has a history of his own ─ despite his illegitimate birth, Bash is his fathers favorite. Though he is all too aware that Francis is the heir to the throne and Marys intended, Bash soon develops his own feelings for Mary. None of the intrigue at Court is lost on Francis mother, Queen Catherine. The strong-willed Queen is aware of Marys inflammatory effect on her son and his half-brother, just as she is aware of the dalliances of her husband, King Henry, not only with his mistress, but with other ladies of the Court, as well. For guidance, Queen Catherine turns to her trusted advisor, the seer Nostradamus, who terrifies the Queen with his prophecy that marriage to Mary will cost Francis his life. Catherine is determined to save her son, no matter how many others have to pay with their lives.

As Mary learns for herself that fierce foes are conspiring to sabotage her marriage to Francis and even threaten her life, she becomes aware of other dark forces. Theres a mysterious presence in the castle; a shrouded figure who may become her unlikely ally. Villagers cope with the brutality of the times by trusting in magic and superstition. And in the dark woods surrounding the French Court lurk those who offer human sacrifice to a being who seems to require blood.

With danger and sexual intrigue around every dark castle corner, Mary rallies her ladies-in-waiting  Greer, Kenna, Lola and Aylee  and steels herself, ready to rule the new land and balance the demands of her country and her heart.

I'd heard about it at some point, but saw an ad for the first time just last night. Being far too old to be their audience, and a little addicted to streaming versus broadcast, I may never get around to it, but it is a curious idea.
"To be the queen, she agreed to be the widow!"

I wonder if it will be as bad as The White Queen in regards to historical fact v.s Hollywood dramatization.
Brenna
Top

Knowing too much about the actual Mary (too stupid to live, in the most literal sense) I am simply cringing at the premise.

I'm cringing right along with you, Emily! Ow ow ow... Mary was a five-year-old child when she was sent to France, forcryingoutloud. Poor little Francois was far from "dashing," and was actually a year younger than she was. The rest of that drivel is just, well, drivel. And the Four Maries are now Greer, Kenna, Lola and Aylee? Words fail me.......
THE RED LILY CROWN: A Novel of Medici Florence.
THE FLOWER READER.
THE SECOND DUCHESS.

I think we all had a good giggle over the YouTube trailer, posted two or three months ago.
But I hadn't seen that blurb for it before.
Who on earth is "Bash"?? Presumably one of King Henri's bastards, of which there were definitely a couple of boys, both called Henri. But Bash??

Let's wait and see.
It might just be a hoot. At best.
The London Historical Fiction Book Group

I chalk it up to Hollywood rewriting history. And since I'm not a huge fan of European stuff, or rather, a purist, I don't really mind the wild ride. I'll watch an episode to see what happens.
News, views, and reviews on books and graphic novels for young adult.
http://yabookmarks.blogspot.com/
Top

Watching the first episode now. Uh, when was she in a convent? The 'four Marys' seemed to have been replaced with four other ladies. Her hair is dark. And it should have been covered, yes? Everyone is really pretty, and so are the costumes. Though some of the dresses didn't have sleeves.

This is like The Tudors for a younger crowd.
Last edited by Nefret on Fri October 18th, 2013, 6:46 pm, edited 3 times in total.
Into battle we ride with Gods by our side
We are strong and not afraid to die
We have an urge to kill and our lust for blood has to be fulfilled
WE´LL FIGHT TILL THE END! And send our enemies straight to Hell!
- "Into Battle"
{Ensiferum}

[quote=""Nefret""]
This is like The Tudors for a younger crowd.[/quote]

Exactly - I expected as much, knowing that the target audience is teenagers, I figured there would not be a lot of historical integrity and that there would be a lot of romantic intrigue, even if fabricated. So I could understand why there's a fictional, good looking bastard and I could even excuse Mary's invented time in a convent (I think they felt it would work better to introduce the audience to the story by reintroducing Mary to the France court) - I was a little less understanding of why Francis isn't the underdeveloped and sickly boy he should be (what better setting for falling in love with a bastard than when her fiance isn't really a romantic option because he's small and sick? That would have worked too)... but I was completely appalled by some of the costumes. Strapless dresses? Really? 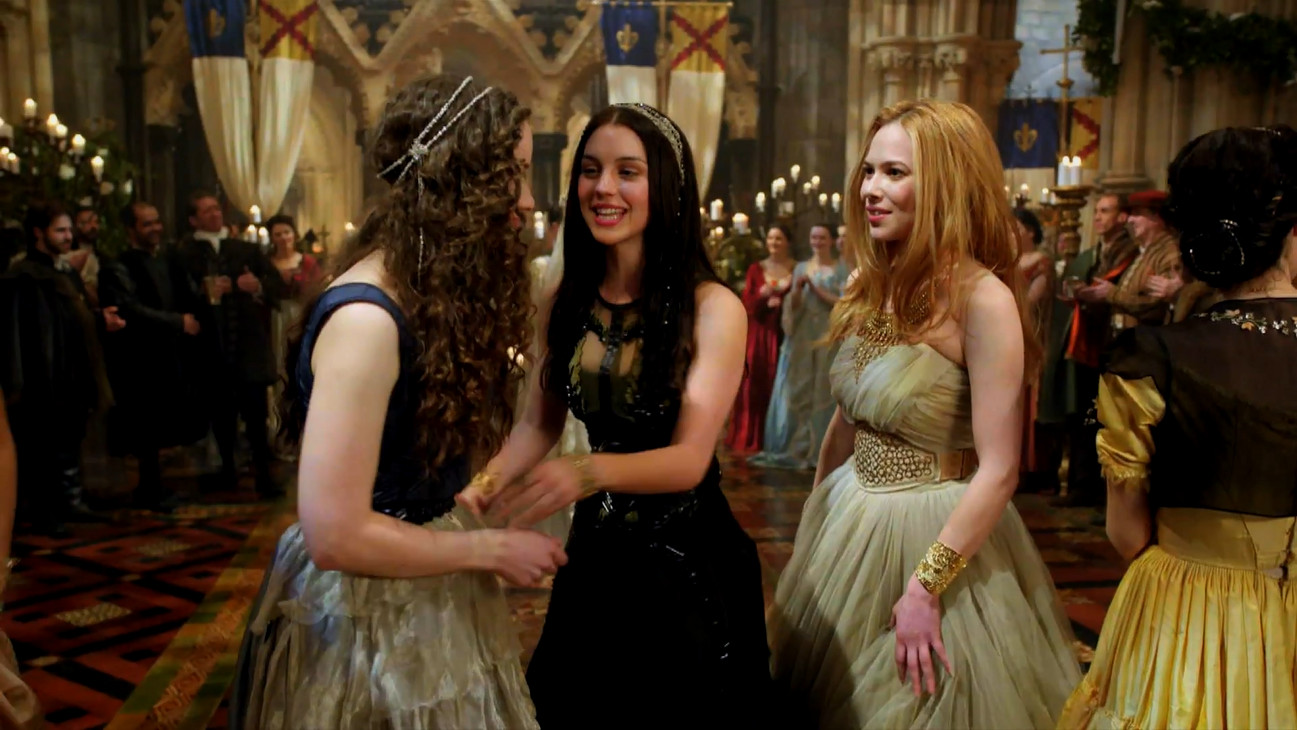 Also, Mary conveniently spends a LOT of time on her own, for a queen.
Historical Readings & Reviews | Genealogical Musings
Top

[quote=""Nefret""]Watching the first episode now. Uh, when was she in a convent? The 'four Marys' seemed to have been replaced with four other ladies. Her hair is dark. And it should have been covered, yes? Everyone is really pretty, and so are the costumes. Though some of the dresses didn't have sleeves.

This is like The Tudors for a younger crowd.[/quote]

The closest I can come to a convent was the Priory of Inchmahome (which is in Scotland, of course, not France), where Mary (aged four, not a teenager), spent a few weeks (not years), after the Battle of Pinkie Cleugh. That brief interlude has been much romanticized through the centuries, and could have "inspired" the convent element of the storyline. Who knows?

The ratings were apparently disappointing.
THE RED LILY CROWN: A Novel of Medici Florence.
THE FLOWER READER.
THE SECOND DUCHESS.