Pen's fence was installed last week, and she is LOVING it so much. And just in time for daylight savings and spring, too. 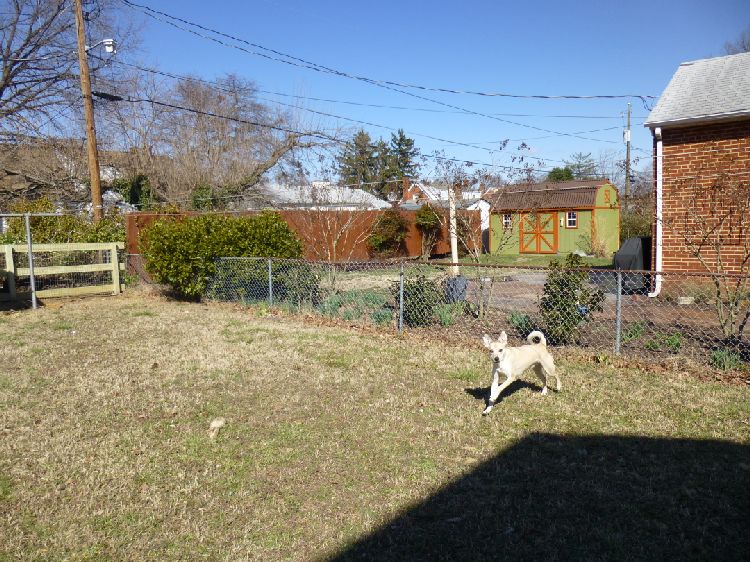 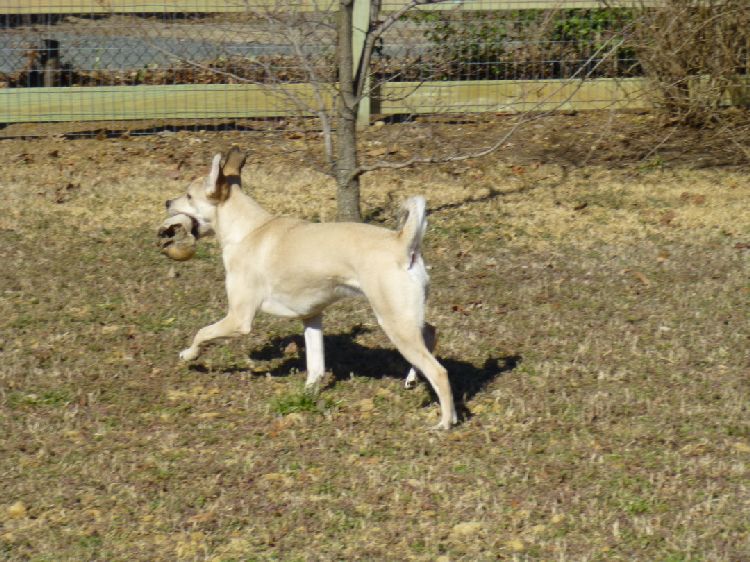 She has gained TEN pounds in our few months together, and it is all muscle - I am astounded at how fast she's grown, and can even see her leaving puppy-hood through my own biased eyes. She's becoming very pretty, but not losing her insouciant cuteness.
"To be the queen, she agreed to be the widow!"

Vanessa
Bibliomaniac
Posts: 4293
Joined: August 2008
Currently reading: The Farm at the Edge of the World by Sarah Vaughan
Interest in HF: The first historical novel I read was Katherine by Anya Seton and this sparked off my interest in this genre.
Favourite HF book: Gone with the Wind by Margaret Mitchell!
Preferred HF: Any
Location: North Yorkshire, UK

That'll keep her safe. She looks like she's having lots of fun.
currently reading: My Books on Goodreads

she certainly does!
Currently reading: "The Cove" by L J Ross
Top

Penelope and I had our one-year anniversary recently. Some pics here.

I told the adoption volunteers the very day I met her, I adopt ears. Of course, I'm rather taken with her underbite and that shiny black lip of hers. And her perky nose. And the fishhook tail ...

Penelope is a rare breed, actually - a primitive, the Carolina Dog. I've become fascinating since figuring out "what she is" - these dogs crossed the land bridge perhaps eight thousand years ago. She'd keep my attention and affection in any case, but discovering her provenance has been a history nerd's dream.
"To be the queen, she agreed to be the widow!"

Penelope is a rare breed, actually - a primitive, the Carolina Dog. I've become fascinating since figuring out "what she is" - these dogs crossed the land bridge perhaps eight thousand years ago. She'd keep my attention and affection in any case, but discovering her provenance has been a history nerd's dream.[/quote]

Ok, that is seriously cool!

I love that dogs have their ancestry-I'm always telling people about the history of Scotties, Westie, and Cairns.
Brenna
Top

Those ears! She looks verra happy

Misfit, I must admit that I let my mom give her one too many leftover bones from her ribs on Saturday - and last night, she had gastrointestinal distress of the first order. Poor thing. Boy oh BOY did she like the treat, though ...

Brenna, I'm one of those who usually tends to be a slight reverse-snob about preferring mutts and not fully appreciating dogs bred into a state of literal ill health, but of course Scotties and Westies aren't among those and they are adorable. A wonderful friend of mine as a kid was Duke, the black Scottie down the block.

The Carolina was long known in the American South before it was categorized and studied; the "yaller dog" or Dixie Dingo has always been around. Longer than we have, obviously! But I love that Penelope and I share deep ties to our earth, or corner of the world, the beautiful red clay that bred us both. She's by far the most intelligent animal I've ever been privileged to live with, and indeed unique in the world of dogs. She makes me very hound-proud.

And lord yes is she ever ear-tastic. Loves to have them rubbed and played with. She even lets me pretend-tie them on top of her worry-wrinkled hayyid.

(Oh yes, I spelled it 'hayyid' ... you would not believe how Southern I get when I'm sweet-talking the furbabies.)
"To be the queen, she agreed to be the widow!"

Okay, don't want to be insufferable and start a whole new thread for Gossamer kitten, but I've had a lot of fun making The Query Shark, AKA Janet Reid the literary agent, fall madly in love with my little grey boy. She featured him last Sunday on her blog - looking for the lost Daylight Savings hour!

Truthfully, I don't believe she's going to take on the manuscript, but I have to admit it's been a kick that she asked to see it. I mean, just a request from her feels like a COUP! But she's funny and so generous, I'm having fun just enjoying her loving my dear grey boy.
"To be the queen, she agreed to be the widow!"