I adopted my dog when she was four - some unfathomably foolish twits *gave her up* which confounds me. I met someone who knew them once, who greeted Lolly (I hardly seem to stick with Sid or any of her original-name-based nicknames, even) by her given name, and who told me they had given her up because she was, essentially, not yuppie enough for them.

Me, I live to be good enough for my dog (or any dog at all, for that matter). Ten years later, she appears to be mostly contented - but I'm not going to stop trying.

She is healthy. She is (as so many dogs are) the Best Dog In the History of Ever.

And she is totally stylin' in her winter coat from grandma ... 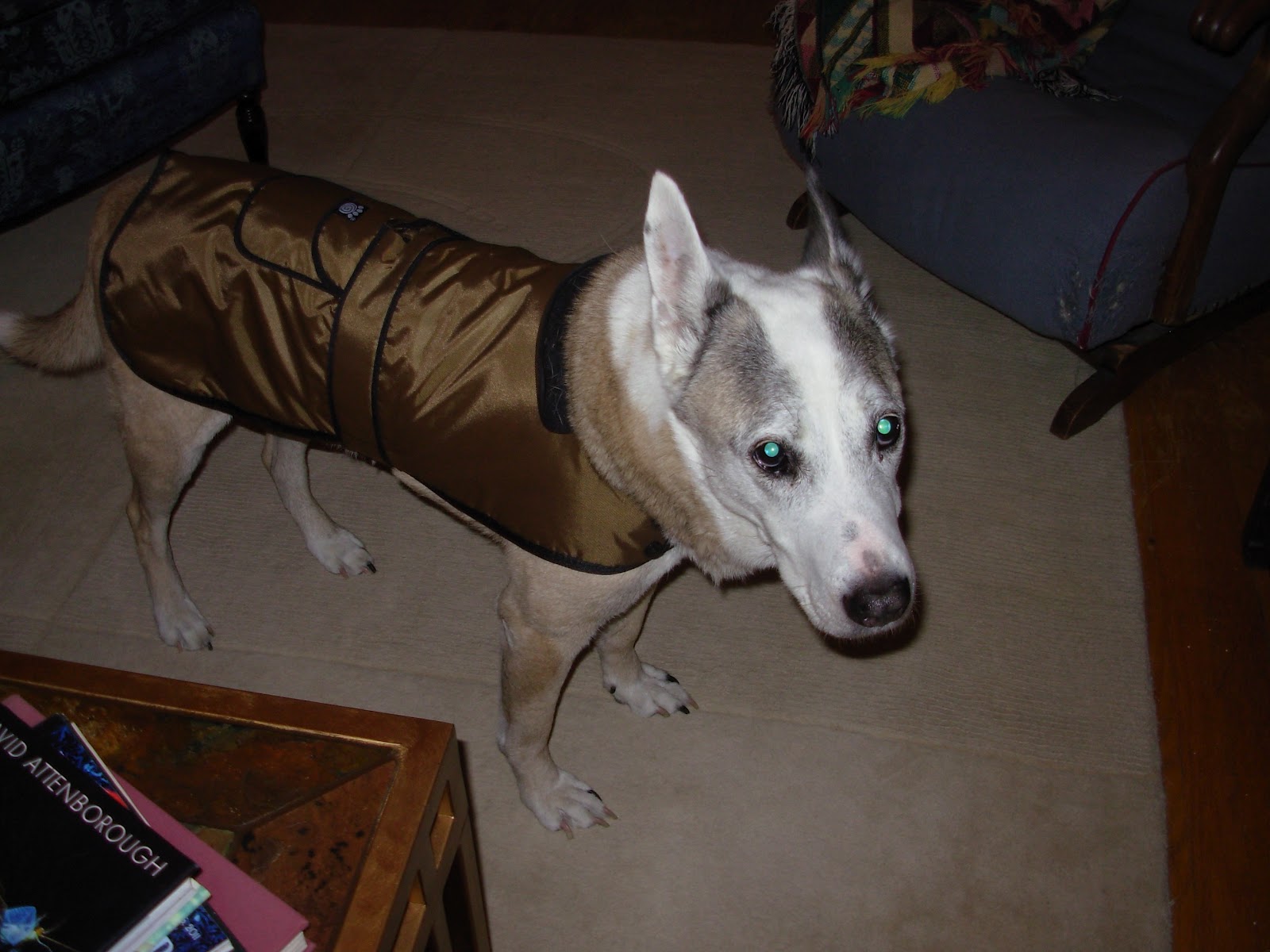 She's a beauty, Diane, you're lucky to have each other! And she looks very smart, who cares about yuppies.
Currently reading: "Celebrations at the Chateau" by Jo Thomas
Top

Vanessa
Bibliomaniac
Posts: 4290
Joined: August 2008
Currently reading: The Farm at the Edge of the World by Sarah Vaughan
Interest in HF: The first historical novel I read was Katherine by Anya Seton and this sparked off my interest in this genre.
Favourite HF book: Gone with the Wind by Margaret Mitchell!
Preferred HF: Any
Location: North Yorkshire, UK

Her previous owners must be very shallow people say say something like that.
currently reading: My Books on Goodreads

Thank you so much! I *am* lucky indeed.

Lolly clearly had training when she was a kid (and some pretty nasty discipline to go with it; after all these years, sometimes she STILL reacts in terror if she thinks she is in trouble). She's very good on her own all day alone. She is simply the best sitting-at-your-feet-while-you-read dog ever. She barks only when someone is outside, which I encourage actually, or to say hello. And she's taught herself a lot of extremely useful ways of managing me - on walks, around the house, etc. SUCH a good monkey, my La.

My apologies, by the way, for the size of the image!
"To be the queen, she agreed to be the widow!"

She's a beauty!
Susan Higginbotham
Coming in October: The Woodvilles

She is just darling! Such sweet eyes! I get suckered in by their eyes each and everytime. Hence the reason my husband strongly discourages me from "helping" out in a shelter. My idea of "helping" would be to bring each and every animal home!!
Brenna
Top

What a huggable sweetie! And looking very smart, too.
Top

Brenna, Siddy has the most wonderful, saddest, beautiful glossy brown eyeballs - they will kill you in a minute. But possibly the most fantastic feature she has is her EARS. Giant, magnificent, velvety ears. My brother calls her Die Fledermaushund! One is brown-black, and the other is white with Dalmatian spots. It's the only black spots on her body, and they form a little snowman. And she has had TWO Dalmatian boyfriends. And a teacup yorkie, and a giant fluffy blonde, our next-dog-neighbor - and she makes eyes at all my girlfriends too. Siddy is kind of a trampy girl.

I'm sure she would love on each of you - she loves making new friends, and her thanks for compliments are always limpidly sincere!
"To be the queen, she agreed to be the widow!"

My poor girl is not doing exceptionally well this week. She's having some pain, and moving very slowly, gingerly. Keep a good thought out for my good old girl, ye lovers of wee and timorous beasties.
"To be the queen, she agreed to be the widow!"