Interesting Ash, but I have to say the shot of Liz Taylor as Cleo is priceless. 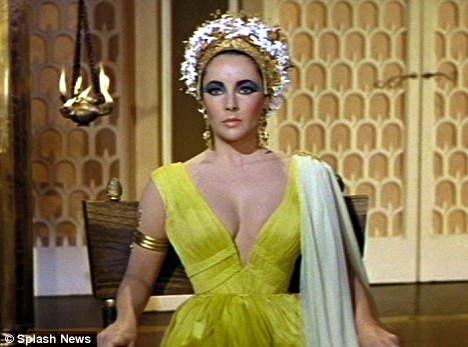 Thanks, Ash and Misfit, I can see her there after looking at some of the images of her around. Liz looks as if she's off to a cocktail party on the Nile, doesnt she? The mixed ethnicity is a touchy subject. There have been relatively recent claims that Cleo might have been black or of mixed heritage, but given the fact that the Ptolemies were so fiercely protective of their bloodline, to the point of constant intermarriage amongst family members, it does seem very unlikely.
Last edited by annis on Tue December 16th, 2008, 5:13 pm, edited 3 times in total.
Top

[quote=""MLE""]Were the wig and the wax customs used by the Ptolemies? I was under the impression that they were rather proud of their Greek heritage, and that the Egyptians, as a conquered people, had better get used to it. I've always wondered if all those black-wig depictions of Cleopatra weren't modern interpretations based on paintings from the pre-Ptolomaic era.

There must be contemporary (to her century, that is) depictions of Cleopatra. What do they look like?[/quote]


One of the problems with the head shaving is that the Egyptians had a habit of portraying their rulers as Pharaoh whether that person actually ever donned the traditional Egyptian regalia. Ptolemy II and Arsinoe II the most striking example. So even if there are images on reliefs or coins that show Cleopatra VII in the double crown we simply do not know if she ever wore it on a regular basis. Or even if she ever wore it. Many authors and even historians like to ascribe a "going native" aspect to her simply because she was polticially savvy enough to ingratiate herself with the Egyptian natives. But how far this went in terms of dress or hair style is simply not known. Considering that Cleopatra clearly had a huge Macedonian court still and was dealing with the incredibly and arrogantly bigoted Romans, it is extremely improbable that she went around dressed in the traditional Egyptian garb to the extent that so many movies and books like to portray her as doing. And while it is clear that her father's mother was not of the royal family and was a mistress at best, it is a huge leap to go from a common Greek woman as mother of bastard children to an Egyptian woman or a woman of sub-Saharan Africa. The ethnocentrism in the Ptolemaic court was probably still rather too strong to allow any real mixing of bloodlines outside the accepted racist attitudes of the time.
Top

There's an interesting article here by Eugene A Stovall which gives his argument for a white Cleopatra of Macedonian bloodlines
http://www.authorsden.com/categories/st ... 5&catid=34

One of the more compelling arguments is that no contemporary sources, like Plutarch, mention that she is black. It surely would have been noted as worthy of comment, especially by those who disliked Cleopatra, fearing her influence on Caesar and desire for him to become a king.
Top

[quote=""annis""]There's an interesting article here by Eugene A Stovall which gives his argument for a white Cleopatra of Macedonian bloodlines
http://www.authorsden.com/categories/st ... 5&catid=34

One of the more compelling arguments is that no contemporary sources, like Plutarch, mention that she is black. It surely would have been noted as worthy of comment, especially by those who disliked Cleopatra, fearing her influence on Caesar and desire for him to become a king.[/quote]


nice article, annis. but i did find it interesting that the author uses Hannibal being black as part of his argument. much like cleopatra there is no plethora of evidence as to hannibal being sub-saharan black other than, like cleo, he was born on the continent of africa (of transplanted phonecian decent). In fact, considering the wealth of propaganda that the romans threw against hannibal, none mention that his skin is any different from their own mediteranian cast. you think thats one of the first things theyd sieze upon.

the romans certainly noticed that Hannibals shock troops, his Numidian cavalry, whom he sent on his most dangerous missions, were very dark of skin. but no mention of the man himself.

one wonders what the point of acertaining some ancient persons race is anyway.
Top

Hi keny- yes, that puzzled me as well - I haven't actually seen Hannibal described as black anywhere either. Some of these vague "contemporary sources" which get quoted are pretty dodgy. I've never come across those ones which describe Cleopatra as short, dumpy and red-haired for example. As far as I know none of the verifiable sources, like Plutarch, give any definite physical description of her at all.

David Anthony Durham (who wrote about Hannibal in his novel "Pride of Carthage") discusses the subject in his blog here:
http://www.davidanthonydurham.com/blog/ ... -race.html

It seems more likely that Hannibal might be of mixed race than Cleopatra.
One thing to remember is that the ancients weren't generally particularly hung up on the subject of skin colour, so in the case of Cleopatra it would be more about keeping the bloodlines Macedonian than any concern about dark skin colour.
Last edited by annis on Wed December 17th, 2008, 6:20 am, edited 4 times in total.
Top

Durham makes a very good point about the American tendency to call a person black if he has any discernible black ancestors at all, vs. the likelihood that any Carthaginian had some black African ancestry as well as Phoenicean, even if their cultural and racial roots were mainly Phoenician.

I couldn't say about Cleopatra, but I know I've seen sculptures of pharaohs and pharaohs' wives in which some of their facial features had distinctly black African characteristics. I think it's very likely there was some mingled ancestry among the pharaonic families. While they did marry sisters, the pharaohs had multiple wives and made some diplomatic marriages to cement alliances, etc. Cleopatra may well have had some black ancestry, even if she was mostly Greek. Regardless of what her actual skin color might have been, that basalt statue of her is quite dark.
Browse over 5000 historical novel listings (probably well over 5000 by now, but I haven't re-counted lately) and over 700 reviews at www.HistoricalNovels.info
Top

one wonders what the point of acertaining some ancient persons race is anyway.

keny makes a good point here. Colour wasn't much of an issue for the ancients, it's a modern issue. As David Durham points out in his blog, the pale-skinned Germanic peoples seemed stranger to the Romans than someone with Numidian or Libyan heritage.
Top

[quote=""keny from prague""]
one wonders what the point of acertaining some ancient persons race is anyway.[/quote]

I have wondered that myself.
Top

I think that it the fuss is caused by the fact that it would suit certain cultural agendas to identify various famous historical figures as either black or white- probably not a very PC comment to make, but there you are!

Meanwhile, back on the Ptolemies, does anyone remember a historical novel featuring Cleopatra's sister, Arsinoe? I keep having the nagging feeling that I've read one in the past, but can't remember a title or author.
Last edited by annis on Wed December 17th, 2008, 6:26 pm, edited 1 time in total.
Top
Post Reply
91 posts