I saw on Wikipedia (no, I do not trust them for my research) that the word prie-dieu was not in use until the 17th c. So...would Henry III of England had a prie dieu in his bedchamber and if so what would he have called it? I read oratory somewhere, but that's more like a little room. I'm talking about the piece of furniture on which one may kneel and pray the rosary or what have you.
http://www.alishamarieklapheke.wordpress.com/
Top

'prie-dieu' means 'before God'. I am sure this was used much earlier; in renaissance re-enactment circles some of the guilds have replicas based on actual pieces used as early as the 15th century.

A prie-dieu could be a bit of furniture, or a table set up with a cross and some other devotional object. If the person was wealthy enough, it might have a portion of scripture, or even a whole bible. Saint's statues and medals were also popular.

Later the classic prie-dieu design looked like a low chair where the worshipper would kneel, facing a platform to rest the prayer-book. That is probably the source of the later date.

Thanks friends. It's so nice to have access to people who are interested in history as I am. Thanks for taking time out of your day to respond.

I do know the meaning of prie dieu and I know what the kneeler looks like. I was only wondering if they had such a kneeler in 1237 or so and if they did have such a piece of furniture during that time, did they call it a prie dieu?
http://www.alishamarieklapheke.wordpress.com/
Top

The early replicas from renaissance times do not look like the low chairs. Most common was a low footed cushion and a table. In medieval spain, there would have been a portion of the room set aside as a personal chapel. I saw one in a reconstructed 10th-century castle (Tortosa, it's the background on my avatar) that was essentially a four-foot-high screen with cross carved into it, a bracket for reading material (most likely a book of hours) and another for a candle. The bottom of the screen was a wood projection where the worshiper could kneel, but it was right on the floor, no cushion. Although Of course one could have been put there.

The castle was done in the oldest antiques they could find -- it is a Parador (Spain's museum/hotels) but as the original castle was Moorish, the 'reclinatorio' (Spanish for prie-dieu) was not, of course, original to the building!

There are lots of links to images of medieval and renaissance prie-dieux here:
http://www.larsdatter.com/prie-dieux.htm

including this one dating from the late10th/early 11th centuries 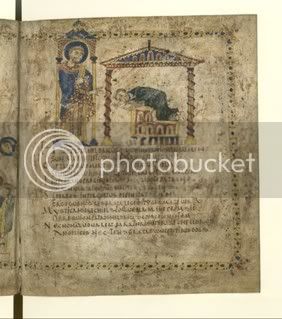 Although this piece of furniture was clearly used in the medieval period, it seems that it didn't acquire the name "prie-dieu" till the seventeenth century. It doesn't seem clear if it had any specific name before that, but I'd say if you wanted to describe it, "prie-dieu" is the term that would be instantly recognizable to readers.

It's the same thing as describing the top edge of the side of a boat as a "gunwale" in the historical periods pre-guns. We don't know what they might have been called then, but "gunwale" is the term we recognize.
Last edited by annis on Wed February 2nd, 2011, 9:09 am, edited 4 times in total.
Top

Thanks! That's what I needed! You know, I never get tired of looking at those old illustrations. There's just something about them that calls to me. I guess that's why I write what I do. Thanks again!
http://www.alishamarieklapheke.wordpress.com/
Top

[quote=""EC2""]The guys in Conquest re-enactment group call that kind of little set up a devotional.[/quote]
It's an 'oratorio' in Spanish (at least in the older documents) but unfortunately that has another meaning in English. So I translate it prie-dieu; it's a word that is specific and sounds 'historical' to modern ears.

Thanks MLE and EC. This is very helpful. What about rosaries in 13thc England? I am painfully ignorant of their history.
http://www.alishamarieklapheke.wordpress.com/
Top
Post Reply
14 posts

Return to “Questions and Research”