Everyone's life is painful in some way or another. And the fact that she was cheating on her husband during Diana's marriage means they weren't apart for all that long.
News, views, and reviews on books and graphic novels for young adult.
http://yabookmarks.blogspot.com/
Top

If I remember correctly Charles asked Camillia to marry him way before Diana but she said no.

[quote=""princess garnet""]Prince William and Kate won't be the only ones marrying next year; Prince Albert of Monaco has his special day in the summer.

I wish other royal weddings would be covered in the news besides the British. Thankfully there's "Majesty" and "Royalty" magazines.[/quote]

I agree about those two magazines. The Brits may be the most visible, but there are plenty of other ones to be curious about. Both of those magazines are very well done, and of course, plenty of photos.
Top

If I remember correctly Charles asked Camillia to marry him way before Diana but she said no.

My understanding is that Charles dithered and Camilla got fed up and married Andrew Parker-Bowles instead. Things got rather incestuous as Charles' sister Princess Anne had a fling with Parker-Bowles at one stage, and I think there are even rumours to the effect that their relationship has recently become rather close again. I was rather dismayed to discover that Andrew Parker-Bowles was the inspiration for Jilly Cooper's sexy aristocratic scoundrel-hero, Rupert Campbell Black - Parker-Bowles wasn't my image of Rupert the charming cad who rides anything on offer, but maybe you had to be there!
Top

[quote=""Michy""]
I can't help but feel that Ms. Hill sounds like an ex-girlfriend of William who is still seething over being dumped by him in favor of Kate.

[/quote] So out of curiosity I checked out Susan Hill's website, and discovered that she's most definitely not an ex-girlfriend of William's!

But maybe her granddaughter is (which could account for the spite!).
[quote=""EC2""]A well known author said on Twitter yesterday that Kate in her blue dress looked like a frump and it was a dull outfit. [/quote] And judging by the (admittedly very small) photo of her on her website, I'd also say she doesn't have room to talk about *ahem* frumps in dull outfits.

[quote=""annis""] I was rather dismayed to discover that Andrew Parker-Bowles was the inspiration for Jilly Cooper's sexy aristocratic scoundrel-hero, Rupert Campbell Black - Parker-Bowles wasn't my image of Rupert the charming cad who rides anything on offer, but maybe you had to be there![/quote]

And with the Princess Royal more recently: 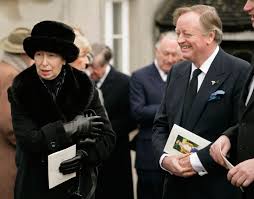 Vanessa
Bibliomaniac
Posts: 4304
Joined: August 2008
Currently reading: The Farm at the Edge of the World by Sarah Vaughan
Interest in HF: The first historical novel I read was Katherine by Anya Seton and this sparked off my interest in this genre.
Favourite HF book: Gone with the Wind by Margaret Mitchell!
Preferred HF: Any
Location: North Yorkshire, UK

That's definitely not how I had pictured Rupert Campbell Black in my mind!!

At the end of the day, we're all human and we all have our little foibles. And every family has its characters, good and bad, saintly or otherwise. I am a Royalist and I do actually think they do a great job - I would hate to be without them. (And I would hate to do their job!) You couldn't just pop down to your local pub for a pint, could you??

I wouldn't like Oliver Cromwell back, that's for sure!

currently reading: My Books on Goodreads

[quote=""Telynor""]
I think that what the Royal family is paid is more than compensated by their immense amount of hard work in charities, and being visible symbols of the UK, as well as the tourist industry. Any time there's a royal wedding in the works, there's a huge amount of hoopla and money making. But politicians I think love to use them as an easy target, as they really can't fight back without looking bad -- much the same as here in the States when it comes to social programs.
[/quote]

Yeah, I read they bring in something like £500mil per year in tourism and it's expected to break 1 billion next year because of the wedding, which would be a huge boost for the economy. It's been estimated their wedding will cost at least £18mil which seems like a ridiculously high amount but compared to the 1 billion they're meant to bring in, it's minimal.


Not sure how Camila is a victim. She got what she wanted in the end. So, doesn't that make her a winner? Sure, it was prolonged, but so what? Life ain't always easy. Diana is dead, after all. Camila got the man and the upcoming crown.

Which is why I'm happy for her. Just because she eventually got what she wanted doesn't mean she didn't suffer emotionally for years and just because life isn't always easy doesn't mean we shouldn't be sympathetic to her suffering. I'm happy that Charles and Camilla, a true love match, finally wound up together. They made poor choices in the past but so did Diana. They were all placed in an impossible situation where Charles was pressured to marry someone he didn't love - for that reason, yes, all three were victims of these reasonable yet traditional expectations of a royal heir. Part of me does think if Charles had just stood up for himself and married who he wanted, none of this would have happened. But I don't think any of us can really know what it's like to be in the situation he was put in and Camilla had even less choice in the matter (as far as I've read, Charles never asked her to marry him before he went off in the military and by the time he got back, Camilla had moved on and married).

All this is why I'm so happy for William and Kate - in the past, Kate probably wouldn't have been considered a suitable match for William and he could have wound up in the same position as his father. It's so good to see royal heirs are finally entitled to marry who they want, regardless of their background or status.
Top

Breaking news - Andrew Morton is to write a William and Kate book.

Doubt it will be anything like as revealing as his Diana book as it seems unlikely he will count Kate, William or any of their close friends and family as sources.
Top

[quote=""Miss Moppet""]Breaking news - Andrew Morton is to write a William and Kate book.