This term came up in a recent read (the son of the overlord claimed the right from the newly wedded daughter of a minor lord). I looked the term up and at least on the entry from Wik it appears a common term but there's no record of it actually having existed? Or did I read that wrong? Anyhoo, the painting from the Wik entry was too cool not to share, 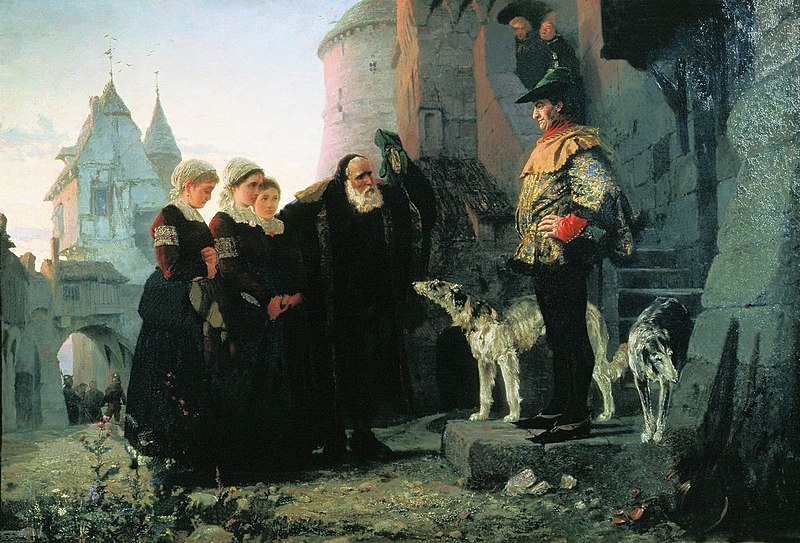 I have to confess that the only time I came across the term was in Frank Yerby's The Saracen Blade which I read in my teens. I don't think I have come across it since -- except was there a brief mention of it in Tale of Two Cities? Not sure about that one.
Currently reading - Emergence of a Nation State by Alan Smith
Top

I can't remember the details but it definitely was not medieval law or custom. I seem to think Sharan Newman has written an article about it, but her website has changed since last I looked and the article no longer comes to hand.
Les proz e les vassals
Souvent entre piez de chevals
Kar ja li coard nI chasront

Very cool painting, Misfit. I love pictures like that, I like to imagine what was "going on"......
Top

The church, a very powerful force in the past, would have absolutely forbidden such a law. They might have looked the other way on a number of sexual misdoings, but when it came to being codified in laws -- no.

I think it is a dramatic fable that writers who can't cobble together a story from what really did happen use instead of doing the research. It smacks of Braveheart-style history, and one mention will usually get the book wallbanged. (Although I don't actually throw bad books; I just drop them in the box for my bookseller friend.

I'm sure that lords took advantage of young women of lower rank, as men in positions of power have always done, but don't think it was ever a formalized situation.

Speaking of Sharan Newman, she has an interesting article on the Medieval Academy of America website about writing HF and dealing with skewed perceptions of the medieval world
Reaching out: Presenting the Middle Ages to Modern America
Top

This Link is interesting and looks at some of the history behind droit de seigneur.

In medieval times the custom was to ask permission of your lord to marry and to pay a fine in lieu of allowing the lord to have the first night with your bride.
By Loyalty Bound - the story of the mistress of Richard III.

Interesting article, Libby. The concept of fertility and sacrifice going together with kingship as the article mentions was very much a part of the religious mythos in many ancient cultures. The idea of droit de seigneur being a form of taxation, a way of screwing more money out of dependent vassals, makes more sense than an actual practice of sleeping with a bride (oops, unintended pun there

I don't think much of the article. Way too sloppy and full of the writer's unfounded theories, weaving a few old references into an argument even while admitting that the evidence is pretty slim.

Whoever wrote it worked the account in 2nd Samuel (re King David) pretty far from the bald facts that the old king had a hard time keeping warm. I suppose the writer has never had to deal with a wilderness situation involving hypothermia.

Consider: if they weren't going to pick an unmarried girl and give her the status of concubine, who would they have picked? David's older wives were certainly too high-status; any younger ones were inappropriate for the job, having recently been compromised by the amorous activities of his rebel son Absalom. So they recruited Abishag to be a human hot-water-bottle and conferred a lot of status on her in return for doing the job.

As for Adonijah angling for the throne -- that had nothing to do with Abishag (at least not during David's lifetime -- he did try a little caper on his brother Solomon that involved her). The article leaves out that for the last several years all David's sons were trying to be put in the position of ruler. Since David was only the second King of Israel, and he was no relation to the first, the question of succession was completely up in the air.

Although as a side note, societies where the king has a harem don't practice primogeniture (eldest inherits) but rather the old ruler co-rules with his chosen successor for the last years of his reign.

There was a recent post on this subject at Hoydens and Firebrands.

What isn't said is that in France at least, customs and laws varied not only between north and south, but from province to province and from one fief to the next. Also that lords might claim rights which never in fact existed, but which they believed or pretended to believe had existed.
Top
Post Reply
10 posts • Page 1 of 1

Return to “Questions and Research”