Oh, Arthur would be a good suggestion, esp since there are so many variations of the legend (Once and Future King and the Bernard Cornwell Arthur trilogy for example)

I for one am not a fan of the librarian action figure
http://www.mcphee.com/laf/
Enough with the sushing and the frumpy blue suit. I want to see a librarian in good shape, with a great hair style, a big smile, and totally surrounded by books.
Top

There's a new book released earlier this year, that has a librarian on the cover wearing a red cape!

I know the one! It's quite an interesting read as well.
This Book is Overdue How Librarians and Cybrarians Can Save Us All. 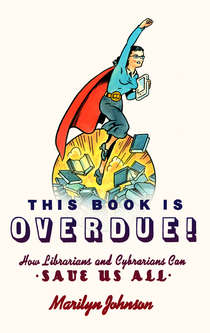 As long as they don't start expecting us to wear spandex catsuits. Contrary to Ash's ideal, most librarians I know would not make a pretty sight in Superman/woman outfits - way too much time spent reading with a packet of chocolate biscuits at hand, and not enough exercising

Edit- OMG, that action figure is wearing one seriously frumpy suit though - dare I say it, even for a librarian!
Last edited by annis on Sat July 24th, 2010, 4:09 am, edited 4 times in total.
Top

Enough with the sushing and the frumpy blue suit.

Forget the suit (I don't think I've ever seen a librarian wearing a suit like that!), but I'd love to bring back the shushing. It seriously bugs me when people carry on conversations in libraries.

I'm going to try a little variation on EC's failsafe three. These are for people who think historical novels are a "genre" and therefore can't be serious literary novels:

There are others, but those are the ones on the top of my mind right now.
Browse over 5000 historical novel listings (probably well over 5000 by now, but I haven't re-counted lately) and over 700 reviews at www.HistoricalNovels.info
Top

Forget the suit (I don't think I've ever seen a librarian wearing a suit like that!)

Umm, I regret to say that I have- and more than once, too! I hasten to add that I don't own one myself

--but I'd love to bring back the shushing. It seriously bugs me when people carry on conversations in libraries.

Me too! I know it's fashionable ideology these days for the library to be conceptualised as "living room", but loudly Skyping tourists, kids playing high volume video games, babies squalling, kids shrieking as they play hide-and-seek round the library shelves all competing with the elderly shouting gruesome operation details at each other mean the library's not the peaceful haven it once was

Oh I agree about that; its one of the reasons I no longer go to the library and just read - too noisy! But its the stereotype of the librarian that I don't like, that all she does is shush.
Top

[quote=""Michy""]It's interesting that the books (or most of them, anyway) that Madeleine and EC mentioned are HF. Not surprising!

I think, though, that the books that would appeal to the widest audience are those that transcend genre. I'm thinking of some of the classics, if for no other reason than because they have stood the test of time, which itself indicates that they have a broad appeal.

I'm thinking along the lines of Les Miserables or A Tale of Two Cities or A Christmas Carol. Les Mis and A Christmas Carol, especially, have exceeded the bounds of typical classics, in that they have really taken on a life of their own in the 20th century.

But even books like these I couldn't say are really "failsafe" because I don't believe that anyone and everyone would like them!

P.S. I just realized that EC titled this thread "failsafe historical fiction", so I guess some of my comments above missed the mark! However, even if we're talking just HF, veering towards the time-tested classics would probably have the best chance of appealing to the widest audience.[/quote]

A lot of people find the classics, Dickens especially, very difficult to read - I read A Christmas Carol last Xmas and, despite having seen lots of different screen versions, still found it a struggle and, as for The Chimes, I barely made it halfway through. Plus we've had debate before that the classics aren't HF as such, as the authors were writing about their own period of time.
Currently reading: "False Value" by Ben Aaronovitch
Top

This is a fun game. I do like her idea of doorways, that most of us have a preference for setting, story, character, or language, and that for us to like a book it is easier if it enters through our particular doorway. So books with the most doorways ate those that are the most fail-safe. For HF, I think one important doorway is always going to be character --- in an unfamiliar world, we need characters we can empathize with and perhaps have already heard of.

With this in mind, I'll pick a few books I have recommended to very different epople who have all liked them:

The Thirteenth Tale --- Diane Setterfield.
Some may quibble at calling this HF because its time period is somewhat indeterminate. Strong on story and characters

Sacred Hearts --- Sarah Dunant
Well, I have recommended it to a number of people who have liked it! Innovative setting, unusual characters, interesting enough storyline.
http://lucypick.com
Top

I'd have to agree about the classics- for the average reader they would be a real turn-off, unless, like those of my generation, you were raised as a kid reading those wonderful Classic Comics

I'll have a go, though I think it's very hard to find books which will suit both men and women.

The Book Thief by Markus Zusak (technically YA, but everyone loves it)
Dissolution by C J Sansom (even readers who don't usually like mysteries respond to the atmosphere and characters)
The Other Boleyn Girl by Philippa Gregory (whatever we might think of PG, a lot of people find this novel a "doorway" into HF, and i have to say it's my personal PG favourite )
Top

I went to a presentation at BEA this year where Nancy Pearl was interviewed on stage, and she had a funny story about how she ended up wearing that outfit for her action figure. I wish I could remember now how it went! I've met her a few times (we share a publisher) and she's very nice.

For a book chapter I'm writing, I was asked to come up with 5 or so titles that can be considered gateways into historical fiction, "sure bets" in a sense (though of course no one book will please all readers). Among them, I'm listing the Guernsey Potato Peel Pie Society book, one by Lisa See, Wolf Hall, and I'm still debating the other two.
Top

Just have to add that the authors I use with greatest consistent success as HF "doorways" for readers are our own Elizabeth Chadwick for women, and Bernard Cornwell for men