'The Best of Anya'

Katherine got me back into HF. And I loved Avalon so much. I didn't care for The Winthrop Woman much. I have 3-4 other novels of hers to read here too.
Books to the ceiling,
Books to the sky,
My pile of books is a mile high.
How I love them! How I need them!
I'll have a long beard by the time I read them. --Arnold Lobel
Top

1lila1:Have you ever read Devil Water ?* I liked that a lot, too.* I've read most of* her books, and I liked that, as well as Katherine and Avalon the best of all her work.Anne G
Top

Devil Water is the next Seton book I plan to read. I'm looking forward to it!
Books to the ceiling,
Books to the sky,
My pile of books is a mile high.
How I love them! How I need them!
I'll have a long beard by the time I read them. --Arnold Lobel
Top

[quote=""Leyland""]Green Darkness, Devil Water and Avalon would be good choices to follow Katherine.

Green Darkness contains several characters linked by reincarnation in two storylines set in the 1960s and during the reign of the Tudors monarchs, Edward VI and Mary I. The Tudor storyline involves a young woman who recklessly and persistently falls in love with the wrong man as time, fortunes and events pass throughout the religious persecutions of Catholics and then Protestants. Resolutions to the past tragic events come about in the 1960s.

Devil Water is primarily centered on the life and involvement of the Earl of Derwentwater and his daughter Jenny before and during the Jacobite rebellion of 1715. The settings are Northumberland, London, and the southern colonies of America. The multiple characters in these diverse locations are what I love most about the book. And the love story between Jenny and Rob is very nicely told.

Avalon is an adventurous 10th century tale of a young Cornish woman named Merewyn who proudly believes she is descended from King Arthur and gets caught up in a Viking raid. She learns a great deal more about her parentage afterwards, and begins a long journey to unknown lands. A love story between Merewyn and a knight named Rumon sets other events into motion.

I love the diversity of Setons stories and her wonderful characterization. The Winthrop Woman and The Turquoise are also well worth reading after the ones mentioned in the post.[/quote]
Thanks Leland, I appreciate you giving a synopsis of the books you recommend. I will have to definitely bump AS up the list in my TBR pile! The truth is I usually only have a bout 1hr a day that I can devote to reading. There was a thread about that on the old site wasn't there? Should start it again here!
Only the pure of heart can make good soup. - Beethoven
Top

My top Anya Seton books are: Katherine, Green Darkness, and Dragonwyck. There was something so deliciously creepy about the last book that I just couldn't put down. Picked up Katherine because of the name, then loved it because of the story (believe it or not, in her new biography of Katherine Swynford, Alison Weir baically trashes the novel in an appendix at the end!). Green Darkness I read on a seven-hour cross-Pennsylvania train ride. I couldn't quite get into The Winthrop Woman, however.
Top

Just stumbled across this on Amazon, another reprint next year. This was not one of my favorites, I liked the first half in New Mexico better than the second half in New York. 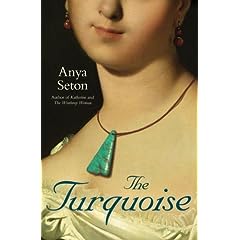 (believe it or not, in her new biography of Katherine Swynford, Alison Weir baically trashes the novel in an appendix at the end!).

Grrrr. I'm interested in reading Weir's bio on Katherine but only if the library picks it up.
Top

Well, I'm probably not qualified to really answer this question seeing as I've only read one of her books so far, but I don't see how any of them could come close to 'Katherine'. This is one of the best, most memorable, all encompassing novels ever. Even though it's long it's actually a very fast read, no slow spots in this one. For me 'Katherine' is the pinnacle of HF.
Top

Nice to know I'm not the only one who's noticed this. It's never done with men. Although actually, I don't often see a man on a cover. When I do, it's from a distance and usually just a shadowy figure.

My favorite Seton is also Katherine. I loved Green Darkness but was disappointed when I tried to re-read it a few years back. I was put off by the all the description of clothes, hair, food, drinks, etc. It didn't quite date the book, but for some stupid reason, I didn't like it. It felt Martha Stewart-y.
Top

It didn't quite date the book, but for some stupid reason, I didn't like it. It felt Martha Stewart-y.

Definitely don't pick up her Smoldering Fires (or was it embers?) book. Another regression one - the first part set in the 1970's in a high school. Very very dated. Couldn't finish it and that's the only one of Seton's I've not been able to get through.
Top
Post Reply
75 posts