Vanessa
Bibliomaniac
Posts: 4304
Joined: August 2008
Currently reading: The Farm at the Edge of the World by Sarah Vaughan
Interest in HF: The first historical novel I read was Katherine by Anya Seton and this sparked off my interest in this genre.
Favourite HF book: Gone with the Wind by Margaret Mitchell!
Preferred HF: Any
Location: North Yorkshire, UK

Yes, I enjoyed The Glass-Blowers, too, and found it quite interesting. I do think, though, it has more appeal to hardened DduM fans.
currently reading: My Books on Goodreads

Just listened to Jamaica Inn a couple of weeks ago, and was a bit disappointed. The fault probably lies in the fact that it was an abridged version (I didn't know that when I ordered it since it didn't say that on the product description, but when I complained the seller refunded my money and told me to keep it, anyway). I suspect that all the lush descriptions that I loved about Rebecca are what was cut out of the abridgement - ? Anyway, it just felt way too condensed to me. I also found it a bit too predictable -- unlike Rebecca, which is completely impossible to predict, with Jamaica Inn it was pretty obvious who the villain and the hero were going to be from early on in the book.

I have My Cousin Rachel on my TBR pile, should get to it within the next few month. House on the Strand is another one I really enjoyed; have read it twice already, and will doubtless re-read it someday.

Those are the only Du Mauriers I've read so far; would like to read more of hers eventually.
Top

I've now finished both Rebecca and Jamaica Inn. I really enjoyed both. Rebecca was wonderful, definitely the best of the four of those I've read. I too found Jamaica Inn very predictable but it was still a great read and I found it very difficult to put the book down once I got into it.

I'm so glad I discovered DdeM. I love how each story is so different from the last. I have a couple more of her books still to read, but I might have to take a break and get through some of the other authors I'm dying to read.

Too many books, not nearly enough hours in the day...
Top

[quote=""CindyInOz""] Rebecca was wonderful, definitely the best of the four of those I've read. [/quote]

I haven't read all of DduM's books, but I do not doubt that Rebecca is the best of all of them. Such an incredibly well-written book.
Top

Just read My Cousin Rachel. So, so, so incredibly well-written; such brooding imagery and not a superflous word or passage. Makes me wonder how many times she re-wrote/revised her manuscripts...?
Top


Daphne du Maurier, author of 'Rebecca' and 'Jamaica Inn', talks to Wilfred De'Ath about her life from her beloved Cornish cliff-top home. In this, her first television interview, the cameras follow as she walks through the house and its grounds recalling key events from her life and revealing memorabilia from her famous theatrical family. She also reflects on the inspirations and influences that have shaped her writing over time and shares archived manuscripts of some of her famous works.

I haven't watched this yet but I will. I don't know if people outside the UK can view it, hope so but I doubt it.
Top

Du Maurier is one of my favourite authors and quite impossible to categorise. Rebecca is gothic, the King's General pure historical fiction, Frenchman's Creek a delicious historical romance, and Jamaica Inn and My Cousin Rachel really quite broody and dark. I also rather like Mary Anne. Set in Regency London it's the true story of Mary Anne Clarke, mistress to Frederick, Duke of York. What a rotter he was, but how she triumphed. And there are many more, finishing with Rule Britannia, a very clever comment on British life. Her strength lies in the beauty of her prose, I think, and the fact that her love of Cornwall is present in every book.

She lived in Fowey until she died in 1989. If you go to Fowey you can see Ferry House, the family home of the du Maurier's, but catching a glimpse of Menabilly is more problematic as it is well hidden in a copse of trees, and as a private home still in the possession of the same Cornish family, the Rashleighs, as it was in Daphne's day. She only rented it, and was obliged to move out later in life, which quite upset her. She was much loved and still fondly remembered in the town, where her family still lives.
Top

That's what I love about her, all the books are so different even though most people think they're all romantic suspense. Julies (AKA The Progress of Julius) is quite dark, with a wholly unredeemable MC. *shudders*
At home with a good book and the cat...
...is the only place I want to be
Top

Fowey has a Du Maurier Festival, I think it's in May but the town is beautiful and worth a visit anyway. You can go to Readymoney Beach, which was one of her favourite places and is nearby. I think you can do boat trips to Frenchman's Creek, and can also visit Jamaica Inn, although it's very commercialised!
Currently reading: "Shadowplay" by Joseph O'Connor
Top

This cover just showed up on my feeds at Goodreads and is too good not to share. 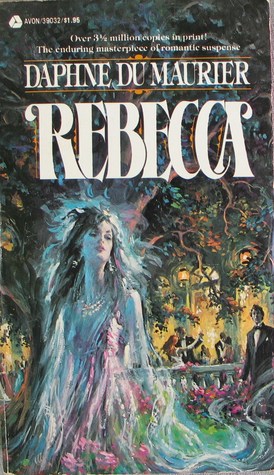 Return to “By Author”