The Sisters Who Would Be Queen: The Greys by Leanda de Lisle NF

Great review...I'm really excited to read this one!
www.passagestothepast.blogspot.com
Top

The Sisters Who Would Be Queen by Leanda de Lisle 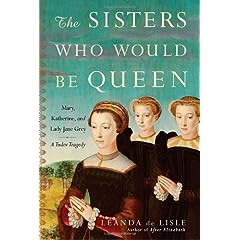 This book covers an extremely complex bit of history, so I will try to keep this as short and sweet as possible. We all know about Henry VIII and out of six wives he had one son, Edward, and two daughters, Mary and Elizabeth. Henry's favorite sister Mary had a daughter Frances who in turn had three daughters - Jane, Katherine and Mary. Upon the death of Edward, well that is when things get complicated as those three sisters (or more specifically any sons they might bear) were potential heirs to the throne of England.

Most Tudorphiles are familiar with the eldest daughter Jane, who becomes the Nine Day Queen and her tragic end. What's refreshing in this book is that de Lisle also shows us *the rest of the story* of the younger sisters Katherine and Mary, who as potential heirs to the throne are unable to marry without the Queen's permission  and Elizabeth was not about to give it and let them have sons who could threaten her crown. Katherine comes to court to serve Elizabeth and falls in love with Edward Seymour, 1st Earl of Hertford, but without Elizabeths permission to marry so they do so in secret, although the lovers face the Queen's wrath when the marriage is discovered. Years later a grown Mary arrives at court and she incurs the Queen's anger when she also marries in secret.

And that's about as far as I'll go, if you know the basic history you know where the rest of the story goes and if you don't, well then read it for yourself. The author does a great job of breaking down some old myths (no, Frances wasn't quite the power hungry harridan she's always been portrayed as) as well as breaking new ground with solid facts and research and puts it all together in a very readable book. It was a tad bit dry at first (I don't normally read non-fiction) but once we got into Katherine and Mary's stories I was hooked and had a hard time putting it down.
At home with a good book and the cat...
...is the only place I want to be
Top

I do want to read this book. It sounds very interesting.

Thanks for the review.
News, views, and reviews on books and graphic novels for young adult.
http://yabookmarks.blogspot.com/
Top

I am currently reading it and while its a decent read I'm not overly enthusiastic about it. Jane has just died, so maybe it will get a little better or shed some new light on old topics.
News, views, and reviews on books and graphic novels for young adult.
http://yabookmarks.blogspot.com/
Top

I'm reading this at the moment and I'm fascinated by the story of Katherine Grey. In fact I was reading the part about her at bedtime last night and suddenly realised that it was almost one o'clock in the morning!

Thanks for the reviews - especially the ones that point out the little details that weren't quite right. I had come away with the impression that the man who had jousted with Henry II had been executed pdq after his death.

But on the whole the research seems sound. It is complex at times. I always become confused when people are given a title and I have to get used to them having a new name. But I've learnt a lot of new things about a period in history that I thought I knew about.

I've also added Katherine Grey to my file of potential subjects for a new novel.

By Loyalty Bound - the story of the mistress of Richard III.

Katherine Grey is very interesting. There should be more books about her!
News, views, and reviews on books and graphic novels for young adult.
http://yabookmarks.blogspot.com/
Top

Would love to read a novel about Katherine Grey

[quote=""Jemidar""]Would love to read a novel about Katherine Grey

[quote=""Jemidar""]Would love to read a novel about Katherine Grey

There are a few although they can sometimes be hard to find:

The Second Sister by Marie Sandeford
5 Gold Rings by Philippa Wiat
The Grey Goose by Joanna Dessau
So Merciful a Queen, So Cruel a Woman (I think this one is about Katherine but not 100% sure) by Alice Harwood

I have all of them but the Harwood book but have only read The Second Sister.
http://www.shelfandstuff.blogspot.com
http://www.tanzanitesbookcovers.blogspot.com
Mind the Gap
Top