large presses seldom give the author even a say over the cover. There are, of course, exceptions to the rule.

Many small presses work with the authors on cover and any interior art. I know we do, and each of the e-presses/small presses I've worked with except one did the same thing.

The only one who didn't was a direct to print, sell the entire run to B&N, publisher.

[quote=""TerriPray""]The use of stock images for covers is pretty common now. The cost of a one off, even a photograph, where you buy all rights, exclusive, for life, is often simply out of the reach of many a small press.

Larger presses have the resources to buy more expensive stock art pieces, but they're also feeling the pinch right now, so that extra $2,000 for an exclusive, all rights, can make the difference between the book going to print, or not...

In some cases it's not laziness that images are re-used. As a publisher you don't know who else has purchased the usage rights to the picture, or when. It can seem that way, but unless someone points it out to the EiC, or the author, that they've seen that picture used elsewhere, how are they going to know?

Searching for titles is easy on google, but searching for images to make sure no other publisher has used that image for a title before.. isn't so easy, and it's very time consuming. Time publishers often don't have.

Even if a search is done, it only shows the books that are currently on sale, often not those out of print, or not as yet on sale. Considering most publishers have a six month lead in for print releases, even if they've checked, double checked and triple checked to see if there's a book currently on sale using that image, they don't know what's been sent to print, or slotted in, by another company until the book is on sale.

I know of one author who showed her cover off to her readers list and soon found out that three other books had used the exact same cover. They had enough time to get that one changed - but if she hadn't shown it off, if a couple of the readers hadn't recognized it, then she'd have been stuck. Once it's gone to the printer there's no changing it.

No, it's often not laziness.

That's fascinating; I had no idea things were like that in the publishing industry... and here's me having worked in publishing... I just found another cover deja-vu this week; one's the cover of a book that'll be out in the US in February, the other is an out-of-print UK title. So yes, I can see how it might be difficult for a publishing company to keep track of where an image has appeared before.
A Girl Walks Into A Bookstore...
Top

Stock imagery can be purchased and used in several different ways - rights managed, where the price is negotiated on a per use / print run agreement, or royalty free, which allows for unlimited use. In regard to original art creation, llustrators and photographers can be contracted in the same way, where they can grant exclusive rights, or they can retain the rights to the image they created with the ability to resell its use. For these reasons, you often see duplication of images - especially in the case of original artworks where it is impossible to grant exclusive rights, like a portrait of Elizabeth I.

For both of my covers, Berkley contracted with an illustrator to produce an original illustration. In both cases, the illustrator had costumes made to match descriptions in the narrative, and used models with builds and coloring to match characteristics of the main characters being depicted. Because I am a graphic designer, and due to the fact that my editor is a peach, I asked for and was was allowed a lot of input on both covers in regard to costume, pose, background, and type treatment, all keeping within the design parameters set by the sales and marketing folk, i.e. they wanted a large female figure on the cover. I am more than happy with the results.

The most surprising aspect for me is the amount of influence the buyers have on cover art. My editor has told me that they will often do a total redesign based on input from the BN buyer - even if it means ending up with an inaccurate cover. In my experience, an adjustment was made to the original cleavage visible on MIDWIFE OF THE BLUE RIDGE (slightly less cleavage) based on a comment from the Target buyer.

Thanks Terri and Christine for your comments. As far as I'm aware the cover art for my forthcoming book is being designed especially for the book and I've already been asked what I think should go on the cover. So I just assumed that it was the same for all publications.

I obviously have a lot to learn!
By Loyalty Bound - the story of the mistress of Richard III.

Vanessa
Bibliomaniac
Posts: 4301
Joined: August 2008
Currently reading: The Farm at the Edge of the World by Sarah Vaughan
Interest in HF: The first historical novel I read was Katherine by Anya Seton and this sparked off my interest in this genre.
Favourite HF book: Gone with the Wind by Margaret Mitchell!
Preferred HF: Any
Location: North Yorkshire, UK

I have The Seance on my TBR pile, although not with that book cover as you can see. It's interesting the difference in covers!

I loved John Harwood's The Ghost Writer.
currently reading: My Books on Goodreads

These are the two that have me doing a double take every time I see one or the other!

Well well. I'm looking at Amazon's new releases for me and I did a serious double take. Georgette Heyer's The Convenient Marriage (new release for 2/09),

And then The Mistress of the Revolution from our own Catherine Delors,

Oh my gosh! Of all the paintings that are out there, why did they have to duplicate that one?
Visit MichelleMoran.com
Check out Michelle's blog History Buff at michellemoran.blogspot.com
Top 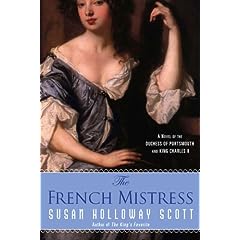 The French Mistress: A Novel of the Duchess of Portsmouth and King Charles II coming out July 2009.