"The War of the Worlds Plus Blood, Guts and Zombies"
http://www.amazon.com/Worlds-Plus-Blood ... y_b_text_b

I bought a copy for the library

I'm not sure if this one's been posted yet, this just popped up on my Ammy recommendations. 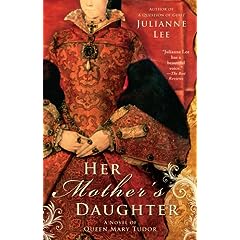 That looks like it could be very good, but I had to laugh at the title. Over the last few years there have been more than a few 'daughter' books: The Butcher's Daughter, The Memory Keeper's Daughter etc. So now we have The Mother's Daughter, a rather obvious title in the group.
Top

[quote=""Ash""]That looks like it could be very good, but I had to laugh at the title. Over the last few years there have been more than a few 'daughter' books: The Butcher's Daughter, The Memory Keeper's Daughter etc. So now we have The Mother's Daughter, a rather obvious title in the group.[/quote]

I laughed at the title too. (Looking forward to this one.)

But the tittle makes sense if you think about it. The book is about Mary I. And she is very much Katherine of Aragon's daughter.
Top

Oh, I know. Just struck my silly bone for a moment or two. Probably will read it. Reading about her in Legacy made me realize that she is much more complex than she is pictured. Be interesting how this one does.
Top

Mary I needs more novels. Seems everyone likes to write about her younger sister and step-mothers more.
Though I like to read anything about them.


Other books I want to read this year:

Twelve long, blood-soaked years, have passed since Artor fulfilled his destiny and was crowned the High King of the Britons. Against all odds, Artor has united Celtic Britain and with a last great campaign, has banished the Saxon scourge. The legend of Camlann has begun. But even as Artor’s kingdom is at its zenith, even as he has succeeded in conquering all external threats to his rule, his kingdom is being undermined from within.

For Artor has chosen Wenhaver (Guenevere) as a second wife. Queen of the Britons, Wenhaver will always love what she cannot have and have what she cannot love, and her bitterness threatens to bring down all those around her. Not only is Artor betrayed by the one person he should be able to trust, he has also learned of appalling perversion at the heart of his kingdom. He must make a terrible choice. Does he commit a deed that leaves him open to comparison with the despotic Uther Pendragon, or does he let evil go unchecked? The burden of leadership, of power, now rests solely – and heavily – on Artor’s shoulders for Myrddion Merlinus, master tactician, guiding light for so many years, has left Artor to his fate. Could all that Artor has fought for, the destiny of Britain, be lost?Will Britain be torn apart?


Conquest: The English Kingdom of France by Juliet Barker. Non-fiction. UK release October 15, 2009.
Author of the best-selling AGINCOURT, Juliet Barker now tells the equally remarkable, but largely forgotten, story of the dramatic years when England ruled France at the point of a sword. Henry V's second invasion of France in 1417 launched a campaign that would put the crown of France on an English head. Only the miraculous appearance of a visionary peasant girl - Joan of Arc - would halt the English advance. Yet despite her victories, her influence was short-lived: Henry VI had his coronation in Paris six months after her death and his kingdom endured for another twenty years. When he came of age he was not the leader his father had been. It was the dauphin, whom Joan had crowned Charles VII, who would finally drive the English out of France. Supremely evocative and brilliantly told, this is narrative history at its most colourful and compelling - the true story of those who fought for an English kingdom of France.
http://www.shelfandstuff.blogspot.com
http://www.tanzanitesbookcovers.blogspot.com
Mind the Gap
Top

The Ides of March by Valerio Massimo Manfredi. US and UK release October 2, 2009. March, 44 BC. Rome, in all her glory, has expanded her territories beyond the wildest dreams of her citizens, led by Caius Julius Caesar - Pontifex Maximus, dictator perpetuo, invincible military leader and only fifty-six years old. He is a man in command of his destiny, who wields enormous power throughout the vast empire. However his god-given mission - to end the blood-splattered fratricidal wars, reconcile implacably hostile factions and preserve Roman civilization and world order - is teetering dangerously close to collapse...His power is draining away. None of his supporters can stop the inexorably evolving plot against him and prophecy will explode into truth on the "Ides of March" and the world will change forever. This is political thriller laced through with all the intrigue and action surrounding one of the most crucial turning points in the history of western civilization.


Nobilitas: A Novel of Rome by Neil Himsworth. US and UK release November 26, 2009. After the withdrawal of large numbers of Roman troops in AD 407, the future of the mist-wreathed island of Britannia is uncertain. Threatened from within by inter-tribal conflict and from without by Saxon invaders, the remaining remnants of the legions face a dilemma: to stay on the island where they grew up and where many have raised families, or accept the will of Rome and take ship to the continent, perhaps never to return.
For Mannius, a trained surgeon and veteran of the legions, the choice is simple: Britain is his homeland and even the prospect of a warmer climate and greater riches practising his craft in a securer part of the empire is not temptation enough to lure him away. However, when his uncle, the governor, is murdered, Mannius realises that the threat to his survival may not only come from the Saxon hoards, and that a great weight of responsibility has landed on his unwilling shoulders: the future of an entire people.
http://www.shelfandstuff.blogspot.com
http://www.tanzanitesbookcovers.blogspot.com
Mind the Gap
Top

I also found these two books by Robert Harris. I'm not sure if they are the same book or not (just with a different title). Anyone know or have a guess?

Lustrum by Robert Harris. UK release October 8, 2009; US release November 24, 2009. Rome, 63 BC. In a city on the brink of acquiring a vast empire, seven men are struggling for power. Cicero is consul, Caesar his ruthless young rival, Pompey the republic's greatest general, Crassus its richest man, Cato a political fanatic, Catilina a psychopath, and Clodius an ambitious playboy. The stories of these real historical figures - their alliances and betrayals, their cruelties and seductions, their brilliance and their crimes - are all interleaved to form this epic novel. Its narrator is Tiro, a slave who serves as confidential secretary to the wily, humane, complex Cicero. He knows all his master's secrets - a dangerous position to be in. From the discovery of a child's mutilated body, through judicial execution and a scandalous trial, to the brutal unleashing of the Roman mob, "Lustrum" is a study in the timeless enticements and horrors of power.


Conspirata by Robert Harris. US release February 2, 2010. 2nd in Harris’s Roman Trilogy. Cicero returns to continue his struggle to grasp supreme power in the state of Rome. Amidst treachery, vengeance, violence, and treason, this brilliant lawyer, orator, and philosopher finally reaches the summit of all his ambitions. Cicero becomes known as the world’s first professional politician, using his compassion, and deviousness, to overcome all obstacles. Harris employs historical detail and an engrossing plot to give readers a man who is by turns a sympathetic hero and compromising manipulator who sets himself up for his own massive, violent ruin., and revenge is the coin of the realm.
http://www.shelfandstuff.blogspot.com
http://www.tanzanitesbookcovers.blogspot.com
Mind the Gap
Top
Locked
463 posts