It's a novel- here's the blurb from Amazon UK
"Superb historical novel of the Jacobean court, in which Princess Elizabeth strives to avoid becoming her father's pawn in the royal marriage market The court of James I is a volatile place, with factions led by warring cousins Robert Cecil and Francis Bacon. Europe is seething with conflict between Protestants and Catholics. James sees himself as a grand peacemaker -- and what better way to make his mark than to use his children in marriage negotiations? Into this court come Henry, Prince of Wales, and his sister Elizabeth. Their louche father is so distrusted that soon they are far more popular than he is, an impossibly dangerous position. Then Elizabeth is introduced to Frederick of Bohemia, Elector Palatine. He's shy but they understand one another. She decides he will be her husband -- but her parents change their minds. Brutally denied Henry's support, how can Elizabeth forge her own future? At once a love story, a tale of international politics and a tremendous evocation of England at a time of great change, this is a landmark novel to thrill all lovers of fine historical fiction."

Making allowance for the publisher's hyberbole, it sounds interesting. Her dramatic and terrifying flight from Prague at the start of the Thirty Years War features in Ross King's "Ex-Libris"[/quote]

Sounds great, hope it makes its way to the US.
Top

The Last Dickens: A Novel 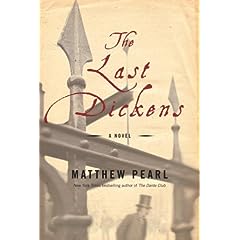 This one's for boswellbaxter our resident Dickens gal.
Top

Due out August this year, another one of Sarah Dunant's novels set in Renaissance Italy, called "Sacred Hearts"

<In 1570 Ferrara, while counter-reformation forces in the Church push for change, 16-year-old Serafina rages against her forced enclosure in a convent>

What Remains of Heaven: A Sebastian St. Cyr Mystery by C.S. Harris
Top

[quote=""michellemoran""]Cleopatra's Daughter is coming out September 15th, 2009. It was just assigned an ISBN number! I'm very excited ;][/quote]
I'm really looking forward to reading it, Michelle. Cleo Selene II had a very interesting pedigree, life and marriage. Juba II also fascinates me, with his Berber heritage, Roman upbringing and extensive education. I'll be buying in September and can't wait to 'meet' them and CS II's siblings through your story.
We are the music makers, And we are the dreamers of dreams ~ Arthur O'Shaughnessy, Ode
Top

First book due out in April of a new trilogy by Jack Ludlow following the story of Norman Tancred de Hautville and his twelve sons over the 30 years leading up to the Norman Conquest of England in 1066.
Volume I of the "Conquest" trilogy is titled "Mercenaries"
Top

We are pleased to announce the imminent publication of Dara Horn's newest novel,ALL OTHER NIGHTS. Here is an advance review from Publisher's Weekly:

"(Starred Review) A Civil War spy page-turner meets an exploration of race andreligion in 19th-century America in Horn's enthralling latest. Jacob Rappaport,the 19-year-old scion of a wealthy Jewish import-export family, flees home and enlists in the Union army to avoid an arranged marriage. When his superiorsdiscover his unique connections, he is sent on espionage missions that reveal an American Jewish population divided by the Mason-Dixon line, but united bybusiness, religious and family ties. After being sent to assassinate his uncle in New Orleans on Passover, Jacob's next assignment proves even more daunting: marry the feisty Confederate spy Eugenia Levy. What starts out as a dangerous game for both Jacob and Eugenia ends up being a genuine romance, fraught withthe potential for peril, betrayal, tragedy and redemption. Horn propels the love story at a thriller's pace; the mix of love and loyalty played out in a
divided America is sublime."
Top

I'm very curious about Mick Jackson's forthcoming The Bears of England, described thusly by the publisher:


'There is no category of bear whose story makes for more depressing reading, and whose miserable existence heaps more shame on humanity than that which follows...' Taking in these bears in chains, the circus bears of Bristol, the Victorian sewer bears and the spirit bears of the early years, among others, Mick Jackson's strange beast of a book explores some little known chapters in England's past. Mixing folk tale with fantasy, and history with myth, the narrative that unfolds is dark, playful and filled with magical moments, as it marches ever forward towards a strange convergence.

Sewer bears? How could I not want to read about sewer bears?

It sounds a bit like Susanna Clarke's Jonathan Strange and Mr. Norrell, which I loved (though I had to take a second whack at it after setting it aside the first time I picked it up).
Browse over 5000 historical novel listings (probably well over 5000 by now, but I haven't re-counted lately) and over 700 reviews at www.HistoricalNovels.info
Top

I just got Dara Horn's All Other Nights for review on Librarything, so will be posting a review there (and on my blog) in due course.
Top
Locked
463 posts