Good jokes and other funny stuff

Good jokes and other funny stuff

TOP NINE 'CAN I TAKE THAT BACK' OLYMPIC QUOTES (includes some mild vulgarity in context):

1. Weightlifting commentator: 'This is Gregoriava from Bulgaria. I saw her snatch this morning during her warm up and it was amazing.'

2. Dressage commentator: 'This is really a lovely horse and I speak from personal experience since I once mounted her mother.'

3. Paul Hamm, Gymnast: 'I owe a lot to my parents, especially my mother and father.'

4. Boxing Analyst: 'Sure there have been injuries, and even some deaths in boxing, but none of them really that serious.'

5. Softball announcer: 'If history repeats itself, I should think we can expect the same thing again.'

6. Basketball analyst: 'He dribbles a lot and the opposition doesn't like it. In fact you can see it all over their faces.'

7. At the rowing medal ceremony: 'Ah, isn't that nice, the wife of the IOC president is hugging the cox of the British crew.'

8. Soccer commentator: 'Julian is everywhere. It's like they've got eleven on the field.'

9. Tennis commentator: 'One of the reasons Andy is playing so well is that, before the final round, his wife takes out his balls and kisses them... Oh my God, what have I just said?'
Last edited by Leyland on Thu August 28th, 2008, 4:25 pm, edited 1 time in total.
Reason: Not Top Ten as originally posted - just nine! Too many years of David Letterman I fear!
Top

ROTFLMAO! Those are great!

Forget the name of the reporter - but a male was reporting on the women's beach volleyball on morning radio. Female talk-back host commented on the teeny tiny bikinis the women were wearing.

Then realised just what he had implied!

"For my part, I adhere to the maxim of antiquity: The throne is a glorious sepulchre."

For those who love JIB JAB. Great political humor.

The path to inner peace

lol, this is so funny, this sounds like me sometimes. kidding!!
I am passing this on to you because it definitely worked for me and we
all could use more calm in our lives. By following the simple advice I
heard on a Medical TV show, I have finally found inner peace.

A Doctor proclaimed the way to achieve inner peace is to finish all the
things you have started. So I looked around my house to see things
I'd started and hadn't finished and, before leaving the house this
morning, I finished off a bottle of Merlot, a bottle of shhhardonnay,
a bodle of zambuca, a butle of vocka, a pockage of Prunglies
tha mainder of bot Prozic and Valum scriptins, the res of the Chesescke... an a box a chocolets.

OK I came up with this myself this afternoon, and I did search online to see if anyone else has used this before but only relation to reading stuff about the real thing.....

The new great system for those of you who rather forgo the games and read a good book!

A good book of your choosing.

Price: Depends on the cost of the book.

I am reminded of Professor Irwin Corey's "historical" one liner: "Jeanne d'Arc means there is no light in the men's room." 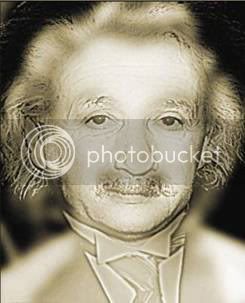 To see this in action you have to start with your nose right up to the screen, then step as far back as you can. One way your should see Marilyn Monroe, the other Albert Einstein.

Now look around. Is anyone watching you?
My Blog - Reading Adventures