The Vow On the Heron - Victoria Holt

The Vow On the Heron - Victoria Holt

by Misfit
This just popped up on my Amazon recs. Appears to be about Edward III (BB's period I think??). Anyone read it? 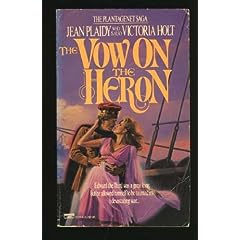 by Carine
Haven't read it yet, but it's being reissued by Randomhouse UKin March 2009.

I wonder what the new cover is going to be like.
by boswellbaxter
I've read it, and it is about Edward III and his family. It's part of Jean Plaidy's Plantagenet series, following The Follies of the King (Edward II). It's OK, not as good as her Tudor novels like Murder Most Royal, and some of it's based on research that has since become dated (the story about Edward III trying to rape the Countess of Salisbury, for instance, is now considered a French slander). Still, it's an entertaining enough read, especially if you're interested in knowing more about the women in Edward III's family.

And that cover is one of my favorites. Queen Phillippa, whose outfit reminds me of something my Barbie dolls in the 1960's wore, certainly never looked so hot, and if the woman is supposed to be Alice Perrers, the king on the cover is way too young!
by Misfit

And that cover is one of my favorites. Queen Phillippa, whose outfit reminds me of something my Barbie dolls in the 1960's wore, certainly never looked so hot, and if the woman is supposed to be Alice Perrers, the king on the cover is way too young

Well the library had it so I placed a hold. WTH, I can always add it to my Is there a good book behind that cheesy cover Listmania

by Tanzanite
I thought it was OK - not one of her best but definately not one of the worst either.

The Vow on the Heron

There are copies on Amazon starting at $4.25.

Don't forget to try your library and if they don't there's always interlibrary loan. I know there's at least one in the country that has it

I found it a bit dry and didn't finish it.
by SCW
Jean Plaidys best novels were the Tudor ones. (in my opinion) Though The Princess of Celle (About George the Firsts wife) is a good read.
by Helen_Davis
I agree with you, SCW. With her Tudor novels I felt she really got a feel for the period and the people. I felt that also with her Queens of England series-- all fabulous and an inspiration for my writing style! I couldn't get through the ones on Anne of Neville or Mary II though-- I would have preferred Philippa of Hainualt or Anne to tell their stories since they are, IMO, much more fascinating than the other queens I just mentioned.

Stick with her Tudor stuff, IMO. I threw her Norman and Plantagenet novels at the wall!

But the Charles II trilogy is good too!

PS: Misfit, I think she wrote this one as Jean Plaidy, not as Victoria Holt.
All times are UTC
Page 1 of 1
Powered by phpBB® Forum Software © phpBB Limited
https://www.phpbb.com/