"Defenders of the Faith" synopsis
<A powerful story of the troubleous days when Tudor succession was in dispute. The chief characters are two contrasting cousins - one daring, brave and adventurous; the other quiet, reserved and thoughtful. But each has his own kind of courage. It is set in Chelsea, Kent, and Spain, and is a vivid portrayal of a family which came to know the wrath of the Spanish Inquisition.>
"Defenders of the Faith" was originally written by JP under the pseudonym Ellalice Tate.

Random House UK have a useful list of their reisuued JPs, giving a synopsis with each title- of course it's still a work in progress, so not all titles are there.
* Edit Sorry, I see that the link doesn't work,but if you go into http://www.randomhouse.co.uk and put "Jean Plaidy" into the Book Browse box at the top of the page the list should come up.

And this Jean Plaidy fan site is also useful for tracking down JP novels and those written under her many other pseudonyms- a real labour of love. Click on any series title and you'll get a synopsis of every title.
http://members.tripod.com/jeanplaidy/id17.htm
Last edited by annis on Wed November 19th, 2008, 9:16 pm, edited 4 times in total.
Top 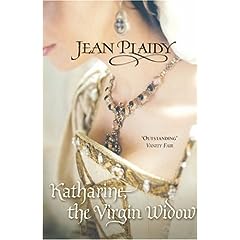 I just love these covers. Another one that popped up on my UK recs.
Top

Three more of the books in the Plantagenet Series will be reissued in the UK in March. The covers are now on Amazon (I'm going to try and insert them here, but if it doesn't work, they are on my book cover blog) and I really like them.

Very cool blog Tanzanite. So I'm bored at work today and not allowed to read at my desk. The French Revolution series, 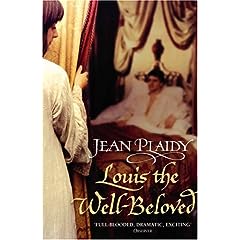 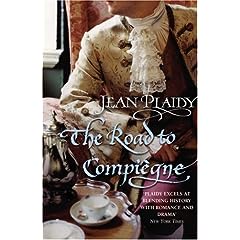 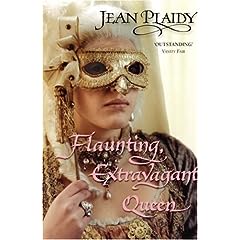 The covers for Defender of the Faith, the two Lucrezia Borgia books and The Scarlet Cloak (no idea what this one is about) are on Amazon UK today and I posted them on my blog:

Assuming that "Scarlet Cloak" is the same book as the original 1957 one with that title, it's about King Philip IIs attempt to reintroduce Roman Catholicism to England

Synopsis:
<The plot deals with characters who are caught up in a time of religious fanaticism, in late 16th century of Spain. There is aristocratic Isabella, betrothed to Domingo, though she is in love with his dashing brother Blasco. There is Bianca, a wild gypsy girl who becomes Isabella's maid, but who has a secret affair with Blasco.
When Blasco is sent by King Philip on a secret mission to France, he sees Catholics there slaughter the Protestant Huguenots, which forever changes his opinion of Catholicism. During the uprising, he risks his life to save a Huguenot woman, then brings her to Spain, where she continues to be in danger from the Catholic Inquisitors.
While he is gone, his beloved Bianca and her mistress Isabella are abducted by English pirates, and once in England, the two Catholic women, in a reversal of religious fanaticism, find themselves in a land where Catholics are persecuted by Protestants.>

I just bought The Queens Confession but it was under Victoria Holt so is it romance or HF? and does anyone know if it will be re-released with a new cover?
Top

I have to say those covers are quite pretty, espically the one with the lady and the mask. To this date I have read nothing by Ms. Plaidy.
News, views, and reviews on books and graphic novels for young adult.
http://yabookmarks.blogspot.com/
Top

"Queen's Confession" is HF, about Marie Antoinette
Synopsis:
<The unforgettable story of Marie Antoinette, from her pampered childhood in imperial Vienna, to the luxury and splendor of her days as Queen of France, to her tragic end upon the scaffold in the bloodbath of the Revolution.>

As far as I know the Victoria Holt titles have not been reprinted, but I might be wrong about that.
Top

Vanessa
Bibliomaniac
Posts: 4237
Joined: August 2008
Currently reading: The Farm at the Edge of the World by Sarah Vaughan
Interest in HF: The first historical novel I read was Katherine by Anya Seton and this sparked off my interest in this genre.
Favourite HF book: Gone with the Wind by Margaret Mitchell!
Preferred HF: Any
Location: North Yorkshire, UK

Some of Victoria Holt's books have been reprinted within the last few years - Mistress of Mellyn, Time of the Hunter's Moon, The Shivering Sands and The Shadow of the Lynx, I think.
currently reading: My Books on Goodreads

Books are mirrors, you only see in them what you already have inside you ~ The Shadow of the Wind
Top
Post Reply
44 posts